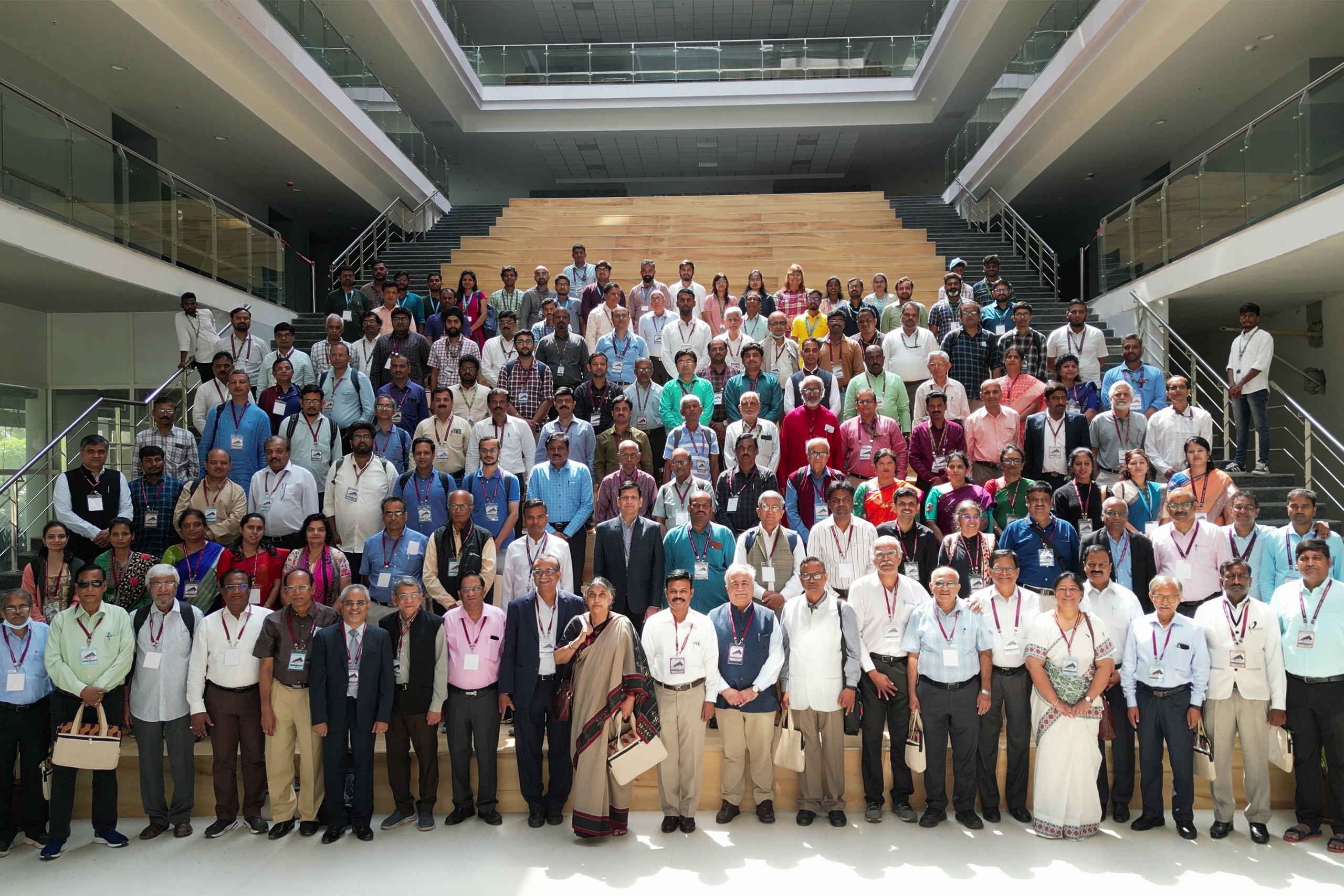 The 88th Annual Meeting of the Indian Academy of Sciences began on Friday, November 04, 2022, at SRM University- AP. The event, which spans three days, features distinguished fellows and associates of IASc and renowned Professors from premier institutions across the country. Prof. Umesh V Waghmare, President of the Indian Academy of Sciences, inaugurated the Annual Meeting with his presidential address on “Instabilities of crystals and their functional properties”.

Prof. Waghmare’s lecture revolved around the usage of fundamental laws of Physics in identifying instabilities in crystals. It also acquainted the audience with how these fundamental concepts hold supreme importance in the development of predictive models that capture interactions between the instabilities and external forces to predict the material-specific functional behaviour of advanced materials. The noteworthy remarks were Illustrated with crystal instabilities of polar phonons, spin-ordering, and strain that drive the functional properties of ferroelectrics, antiferromagnets, and shape memory alloys, respectively.

In his welcome speech, Prof Manoj K Arora, Vice-chancellor of SRM University- AP, requested the fellow and associate members of IASc to encourage and instil their unwavering admiration and inclination for research and development into the faculty of educational institutions. He also expressed his concerns about how science and technology are instructed to students in classrooms; considering the enthusiasm and genuine yearning for innovations; it should evoke among students to retain the potential for constructive explorations in ages to come.

“The things that kept an organisation like ISRO going beyond human imaginations and expectations is the solemn belief in themselves, the teamwork and the right sublime combination of the wisdom of past generations and the innovative outlook of the young generation”, stated Prof D Narayana Rao as he expressed his immense acclamation towards the institutes that constitute to the research and development of the country. He also asserted why discovering basic science matters or should be appreciated as they might get transformed into the theories of tomorrow. He also added that the scientific community is destined to live up to the responsibility and highlighted the need to upgrade intellectual and material prosperity. He also emphasised that educational institutions are the backbone of research and development in a country, and there are eccentric career opportunities for the youth in the coming years.

Pro-Chancellor of SRM University- AP, Dr P Sathyanarayanan, thanked IASc for believing in the university’s calibre to be a host and a part of the initiative. He said that he is expecting around 10000 students to benefit from the event. Furthermore, he elaborated on the potential of industry and academia coming together for the improvement of research and development of the country.

The inauguration was followed by a special lecture on “Uniqueness of plant mitochondria: Relevance to crop improvement and climate change” by A S Raghavendra, University of Hyderabad. Swagata Gupta from IIT Kharagpur chaired the lecture. The session concentrated on the distinct features of plant mitochondria that set them apart from animal mitochondria. The speaker elaborated on how mitochondrial metabolism can help plants to adapt to climate changes in terms of flooding, global warming, and elevated CO2.

Afternoon sessions started with lectures by fellows and associates and were chaired by K Bhanu Sankara Rao, University of Hyderabad. The first lecture by Dr D B Ramachary, University of Hyderabad, on the “Discovery of sustainable organocatalytic reactions: Expansion of substrate/catalysts scope”. Discussed the discovery of in-situ generated novel reactive primary catalytic species. The session also focused on their direct applications in a variety of selective green bond formations to furnish the chiral functionalised molecules, drugs, drug-like molecules, natural products, and pharmaceuticals. The second speaker Aditya Bandyopadhyay from IIT Kharagpur talked about “Electrified fluid interfaces- Waves and pattern formation”. He detailed how Interactions of electric fields at the interface of two fluids can lead to particle agglomeration at interfaces, as applied to DNA motion at the interface of two aqueous solutions.

The special lecture was followed by a Symposium on Green energy. Dr Ranjit Thapa, Associate Dean- Sciences, SRM University- AP, introduced the symposium that provided a deep understanding of hydrogen generation, hydrogen fuel cells, and beyond hydrogen. Dr Ashok K Ganguli, IIT, New Delhi, handled the first session of the symposium on “Photoelectrochemical water splitting for green energy”. The key process of converting water into clean and renewable hydrogen fuel by using highly efficient photocatalysis was discussed. Furthermore, the session also underlined the growing interest in suitable semiconductor materials as photocatalysts for efficient photoelectrochemical water-splitting applications. The transformation needed to achieve the goals of the Paris agreement, the necessity of renewable energy, the difference between clean, green, and renewable energy, photocatalysis, and many more interesting areas were covered during the lecture. The next lecture on “Low-carbon biohydrogen: Enabling through biorefinery” was delivered by S Venkata Mohan, IICT Hyderabad, and was followed by another talk on “Electrochemical energy systems: Hydrogen generation and its use in fuel cells” by S Sampath, IISc, Bengaluru. The symposium came to a close with the lecture of Ramendra Sundar Dey, Institute of NanoScience &Technology, Mohali, on “Electrochemical nitrogen reduction reaction for the synthesis of ammonia: A pathway to a green future”.

All the sessions were followed by meaningful discussions and dialogues with distinguished participants. IASc Secretaries Prof Renees Borges, Prof. Vijay Mohanan Pillai, Treasurer Raghunathan V A and many other dignitaries from the Indian Academy of Sciences, Bengaluru and SRM University-AP, Andhra Pradesh, were present at the sessions.

Read more about the public lecture of P Sainath 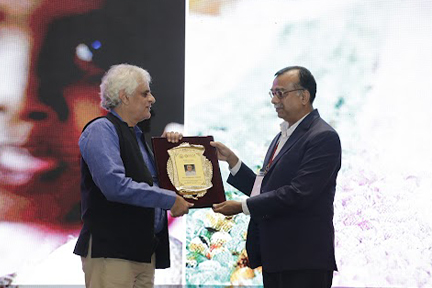 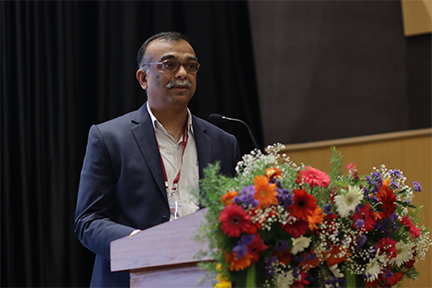 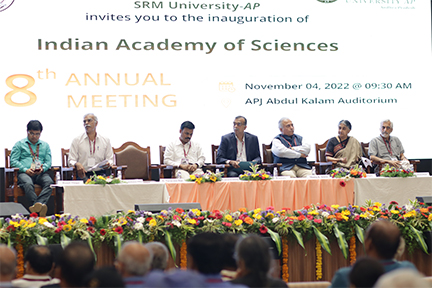 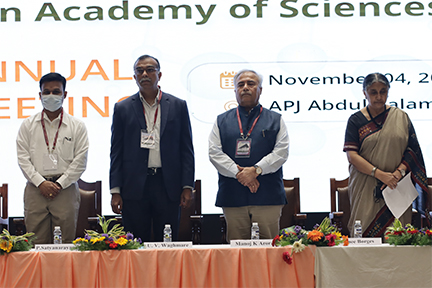