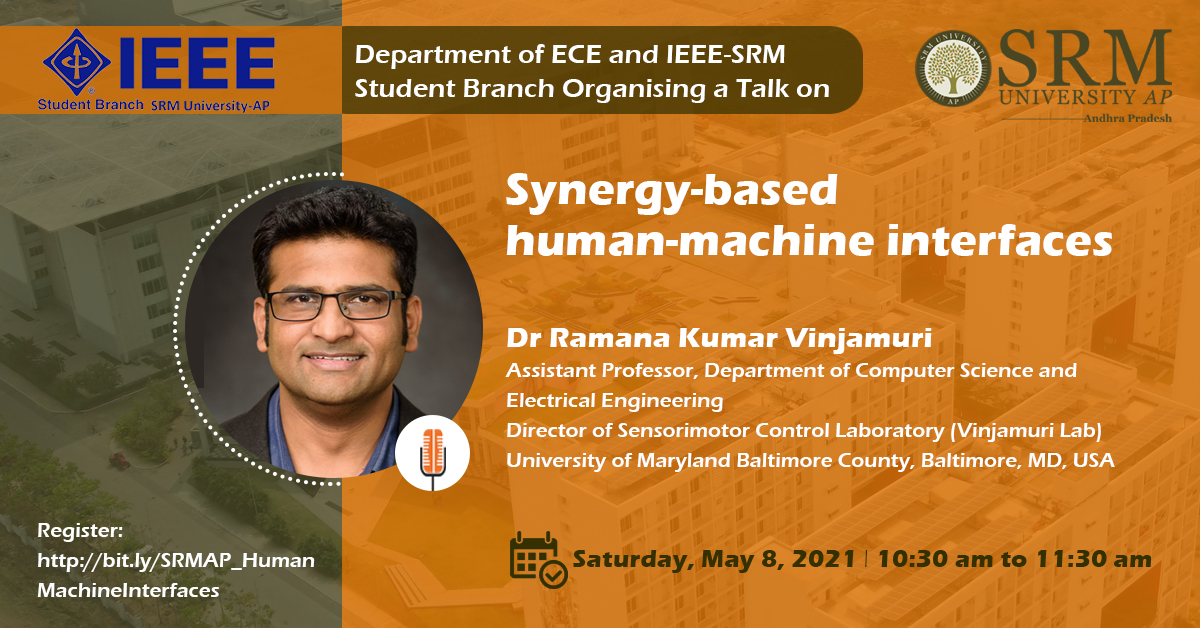 In collaboration with IEEE-SRM Student Branch, Department of Electronics and Communication Engineering, SRM University-AP, Andhra Pradesh, is organising a highly called for discussion on “Synergy Based Human Machine Interfaces”. The event has been scheduled for May 8, 2021, at 10:30 am. Dr Ramana Kumar Vinjamuri, Assistant Professor, Department of Computer Science and Electrical Engineering and Director of Sensorimotor Control Laboratory (Vinjamuri Lab), University of Maryland Baltimore County, Baltimore, MD, USA, will honour us with his presence as the keynote speaker.

Human-machine interface (HMI) has not only become a popular technology but has become the hope of many individuals for restoring their lost limb function. Any HMI has two important intrinsic design components—(i) decode the human commands and (ii) controlling the machine to convert that command into action. Decades of research went into making the interface between the human and the machine seamless but was unable to effectively address the inherent challenges, namely, complexity, adaptability and variability.

To overcome the above challenges, it is critical to computationally understand and quantitatively characterise human sensorimotor control. Emerging areas in HMIs critically depend on the ability to build bioinspired models, experimentally validate them and utilise them in adaptive and intuitive control. The human hand with high dimensionality encompasses the three inherent challenges and may serve as an ideal validation paradigm. How central nervous system (CNS) controls this high dimensional human hand effortlessly is still an unsolved mystery.

To address this high dimensional control problem, many bioinspired motor control models have been proposed, one of which is based on synergies. According to this model, instead of controlling individual motor units, CNS simplifies the control using coordinated control of groups of motor units called synergies. However, there are several unanswered questions today— Where are synergies present in CNS? What is their role in motor control and motor learning? By combining the concepts of human motor control, computational neuroscience, machine learning and validation with noninvasive human experiments, can we answer these fundamental questions? The goal of this research is to develop efficient, seamless and near-natural human-machine interfaces based on biomimetically inspired models.

Dr Ramana Vinjamuri received his PhD in Electrical Engineering in 2008, specialised in dimensionality reduction in control and coordination of human hand from the University of Pittsburgh. He worked as a postdoctoral research associate (2008-2012) in the field of Brain-Machine Interfaces (BMI) to control prosthesis in the School of Medicine, the University of Pittsburgh, where he received Mary E Switzer Merit Fellowship from NIDILRR in 2010. Prior to that, he worked as a Research Assistant Professor in the Department of Biomedical Engineering at Johns Hopkins University (2012-2013) in the area of neuroprosthetics. He also served as an Assistant Professor in the Department of Biomedical Engineering at Stevens Institute of Technology (2013-2020). In 2018, he received Harvey N Davis Distinguished Teaching Award for excellence in undergraduate and graduate teaching. He earned the NSF CAREER Award in 2019 and NSF IUCRC Center Planning grant in 2020. His other notable research awards are from USISTEF and New Jersey Health Foundation. He holds a secondary appointment as an Adjunct Assistant Professor at the Indian Institute of Technology, Hyderabad, India. He is currently an Assistant Professor in the Department of Computer Science and Electrical Engineering at the University of Maryland Baltimore County.