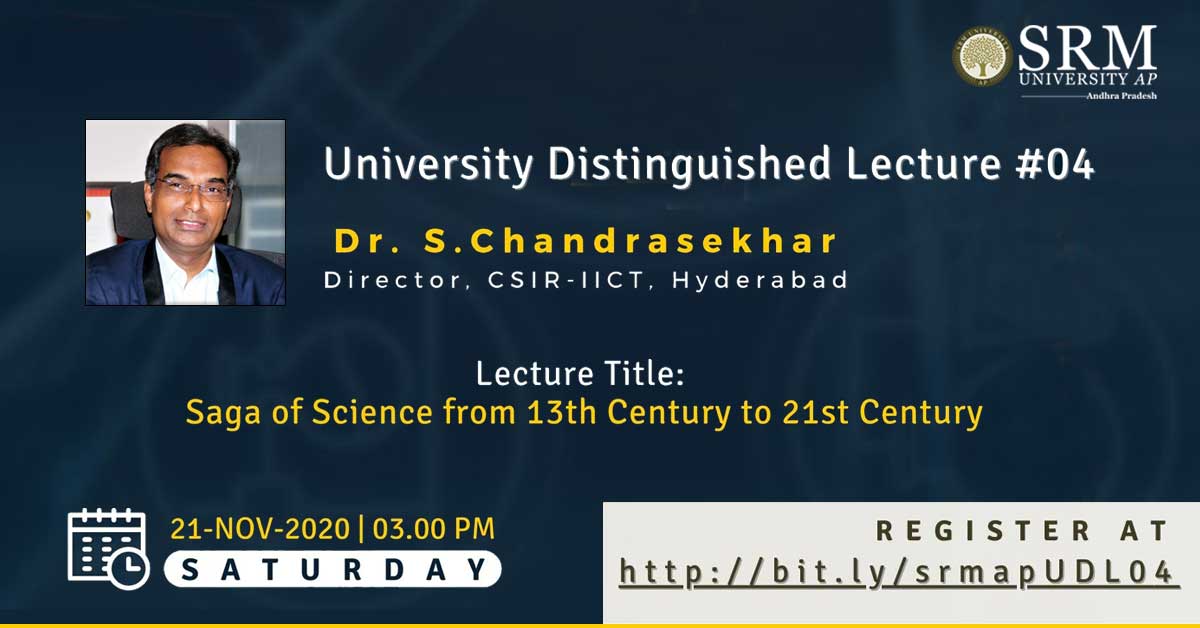 The fourth edition of the University Distinguished Lecture organized by SRM University-AP, Andhra Pradesh will be delivered by Prof S Chandrasekhar, Director, CSIR-Indian Institute of Chemical Technology, Hyderabad. On November 21, 2020, at 3 PM, the session on “Saga of Science from 13th Century to 21st Century” will be steered by the esteemed academician. Prof S Chandrasekhar joined CSIR-IICT as Scientist C and became the director in 2015. He has made significant contributions in diverse areas of organic chemistry with a special emphasis on chiral chemistry, total synthesis of biologically active natural products and pharmaceutical products. Further, he has received several accolades including the Eminent Scientist Award for contributions in the field of Chemistry from Telangana State Government in 2017, CNR Rao National Prize for Chemical Research 2012, CSIR Technology award 2014, and Infosys prize in Chemical sciences 2014 for his contributions to synthetic organic chemistry.

Prof S Chandrasekhar has developed technologies for the synthesis of the latest anti-tuberculosis drug, bedaquiline; anti-tumor and abortive drug, misoprostol; anti-platelet molecule, beraprost; antidepressive compound, sertralin and drug for treatment of schizophrenia, asenapine. During his lecture, Prof S Chandrasekhar will frame a narrative of the knowledge explosion in terms of science and technology from the 13th to 21st century. Providing a historical perspective, he will describe the evolution of the technology base and the transformation of production and service activities.