Dr Tathagata Sengupta to speak on ‘Debt, Mathematics and Education’.

Dr Tathagata Sengupta to speak on ‘Debt, Mathematics and Education’. 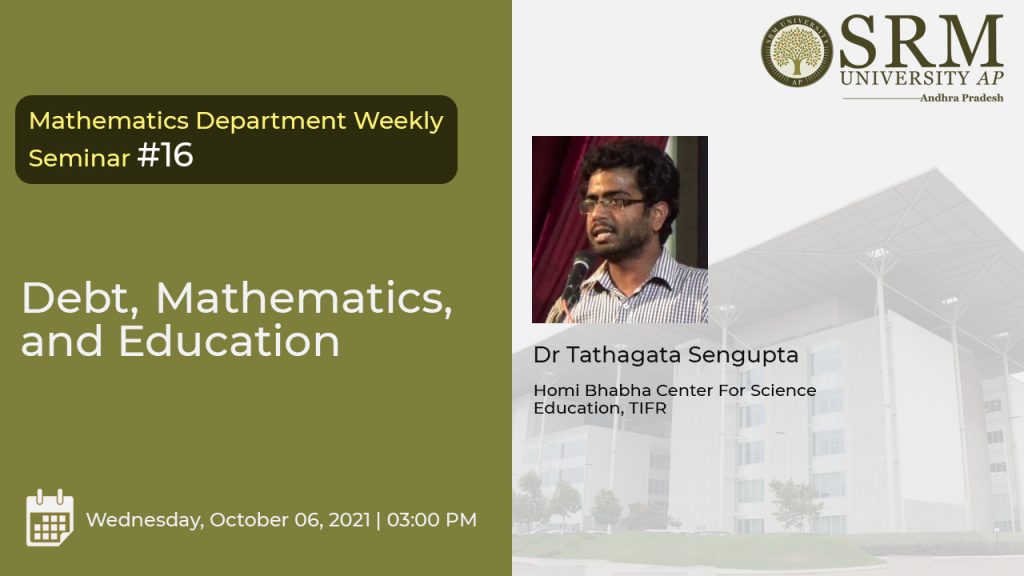 Department of Mathematics is organising the 16th edition of the “Departmental Weekly Seminar Series” on October 06, 2021, at 3 pm with Dr Tathagata Sengupta as the Chief Guest. Dr Tathagata Sengupta is from Homi Bhabha Centre for Science Education, Tata Institute of Fundamental Research and he is going to speak on ‘Debt, Mathematics and Education’.

The talk is based on the ongoing work of Dr Sengupta, where he and his collaborators deal with the sociological, emotional and intellectual impacts of mechanical reproduction of formal knowledge systems – such as those based on mathematical models – in the service of economies of endless repetition and mass reproduction. Symbols and formalisms can carry over across different paradigms of human existence, across both time and space, without the underlying meanings and subtleties necessarily being carried along. Such nominalisation of meanings only gets exacerbated under systems of massive mechanical reproduction. Mathematical models particularly are not just mere vehicles of computation but play a paradigmatic role in the very realisation of today’s political economy – being endlessly used to reproduce social relations that suit the interests of power and capital.

Specifically, Dr Sengupta and his team analyse a particular, basic microfinance model that aims to mathematise and thus aid in the management of micro-lending businesses. They describe how such a model not only tries to construct particular social realities and certain kinds of financial ‘common sense’ as such but also how pre-existing normative common sense is likewise codified into the model itself. They argue how such mathematical models have no independent truth value outside of specific historic processes, contexts and paradigms of public common sense – hoping that this allows us to fundamentally shift the culture of mathematical modelling in a way that respects such subtleties of human knowledge in their extremely rich, dynamic, plural, communistic wisdom and creativity.

Dr Sengupta’s main attempt is to push the discussion not only out of the binaries of ‘good/bad models’ but also beyond rule-based rationalist imaginations of ethics into the mundane and emotional – and yet creative, subtle and even magical – daily existence of ordinary people. Existence is marked by social relations of radical inequalities and radical unities. In particular, this also opens up possible directions to pursue intellectually and in practice, when it comes to the question of education.

Mathematics enthusiasts can avail this opportunity to listen to the captivating talk of Dr Tathagata Sengupta on October 06, 2021 at 3 pm.