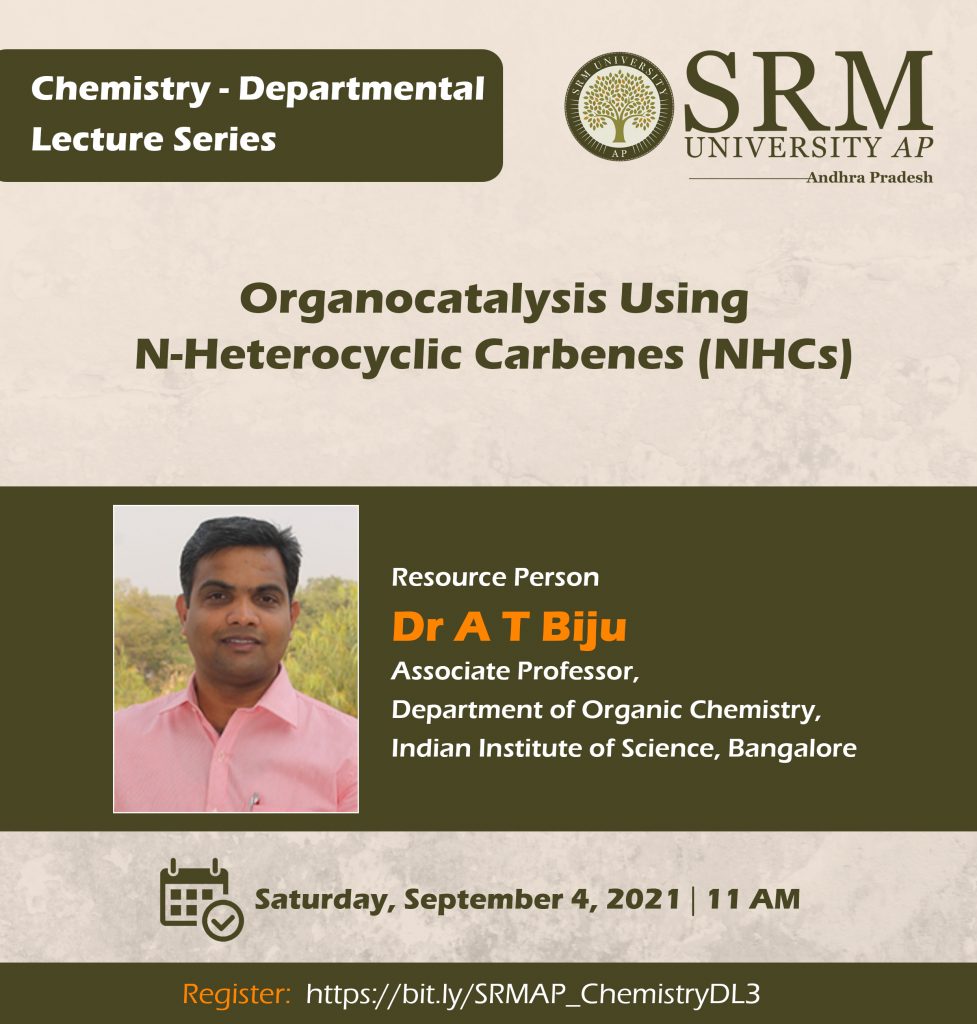 Catalysis is a fundamentally sustainable process, which can be used to produce a wide range of chemicals and their intermediates. Among the various catalytic methods, N-heterocyclic carbene (NHC)-catalyzed umpolung of aldehydes is widely used for unconventional access to target molecules. Moreover, NHC-catalysis is known for umpolung of Michael acceptors, but imine umpolung was unknown in this realm of catalysis. In this context, Dr Biju and his team have demonstrated, for the first time, the NHC-catalyzed umpolung of imines for the synthesis of 2,3-disubstituted indoles, functionalized quinolines and dihydroquinoxalines. In addition, NHC-catalysis is widely used for the generation of α,β-unsaturated acylazoliums, followed by their interception with various nucleophiles, the formal [3+3] annulation reactions. In this area, recently Dr Biju and his team have reported the enantioselective NHC-catalyzed annulation reactions for the synthesis of dihydropyranones, dihydropyridinones, cyclopentenes, pyrazoles, spirocyclohexadienones, tricyclic δ-lactones, tetracyclic indoles etc., where NHC-bound α,β-unsaturated acylazoliums are the key intermediates. Very recently, Dr Biju employed the umpolung of aldehydes for the synthesis of axially chiral C-N bond-containing molecules. The keynote address will shed further light on this.

Dr A T Biju received his M Sc from Sacred Heart College Thevara (affiliated to MG University, Kerala, India) and PhD from CSIR-NIIST (Formerly RRL), Trivandrum, India. After that, he worked as a post-doctoral fellow with Prof. Tien-Yau Luh at the National Taiwan University, Taipei. He has also worked as an Alexander von Humboldt fellow with Prof. Frank Glorius at the Westfälische Wilhelms-Universität Münster, Germany. In June 2011, he began his independent research career at the CSIR-National Chemical Laboratory, Pune. He became an Associate Professor at the Department of Organic Chemistry, Indian Institute of Science, Bengaluru, in June 2017. His research focuses on the development of transition-metal-free carbon-carbon and carbon-heteroatom bond-forming reactions using aryne chemistry and N-heterocyclic carbene (NHC) organocatalysis and their application in organic synthesis.

Chemistry enthusiasts are welcomed to avail the opportunity to listen to him on Saturday, September 04, 2021, at 11 am. Register now.