Upping our A-game with NITTTR Chennai and SRM faculties

The Faculty and Academic Affairs unit is hosting a Faculty Development Program (FDP), an initiative of the SRM University-AP Teaching Learning Centre (TLC), which was inaugurated on October 25, 2021, at 2:45 pm by Prof. V S Rao, our esteemed Vice-Chancellor who graced the event as the Chief Guest and the revered Prof. Usha Natesan, Director, National Institute of Technical Teachers Training and Research (NITTTR) Chennai as the Guest of Honour in the occasion.

NITTTR Chennai is a Ministry of Education, Government of India-funded institution. The SWAYAM-MOOCs (Massive Open Online Courses) courses offered by NITTTR have become very popular among the teachers’ community as easy-to-access resources.

The entire FDP will be conducted in four batches and over 170 faculty members of SRM University will participate in it to learn about the latest developments in pedagogical methods and their incorporation in the classroom setting. The events for the first batch will continue from October 25, 2021, till November 6, 2021, from 3.00 pm to 5.00 pm every day coming up to a total of 10 sessions.

This Faculty Development Program jointly designed by NITTTR Chennai and SRM University-AP will give our educators the essential tools needed to make every classroom experience an unrivalled growing opportunity for the students. We urge our faculty members to make the most of this event from October 25, 2021, onwards. 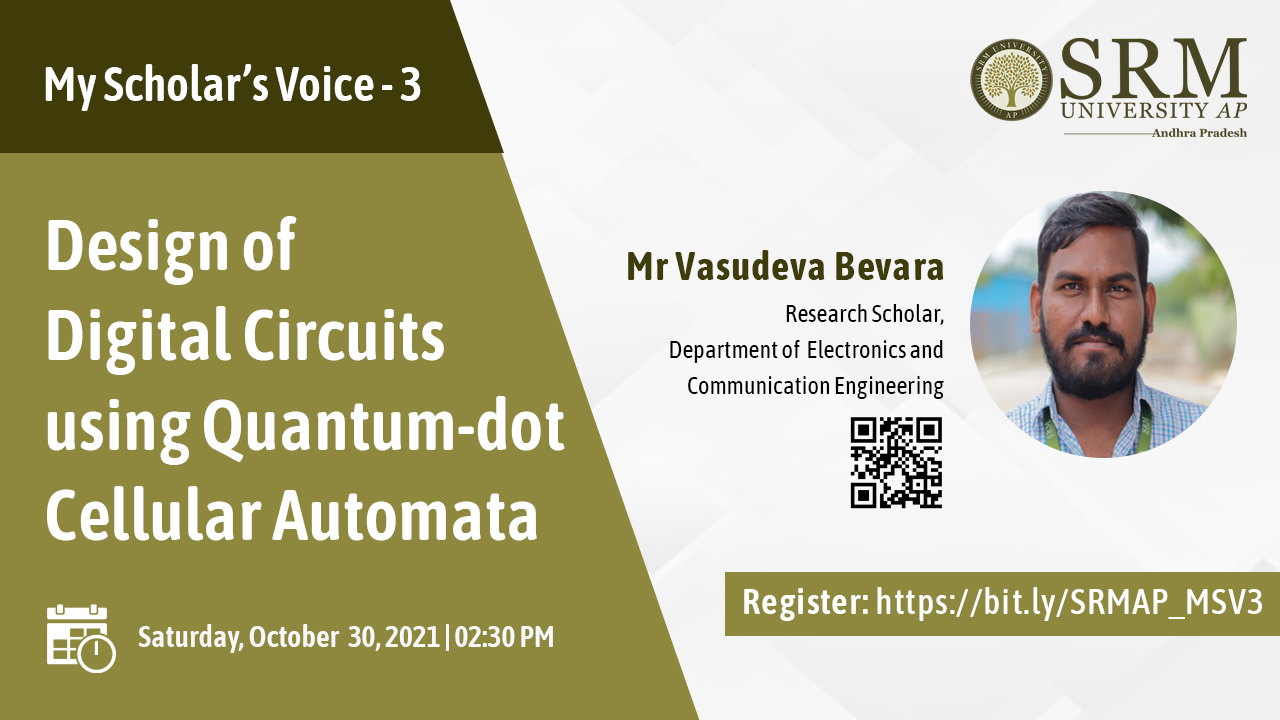 Our scholars of today are the researchers who will one day lead the research sectors of this country. It is their thoughts, their ideas and their presentations which shall be the voices of tomorrow.

In the third edition of My Scholar’s Voice, we present before you Vasudeva Bevara, from the Department of Electronics and Communications Engineering to deliver a talk on “Design of Digital Circuits using Quantum-dot Cellular Automata” on October 30, 2021, Saturday at 02.30 pm.

Vasudeva Bevara is very keen to continue his research in the area of digital VLSI design, Quantum-dot Cellular Automata, and digital image and video processing. He will be delighted to enlighten all of us about the most interesting aspects of his research and the scopes for its implementation in key sectors.

So, tune in on October 30, 2021, Saturday at 02.30 pm to hear Vasudeva Bevara speak and learn about an engaging technical aspect with fertile research possibilities. 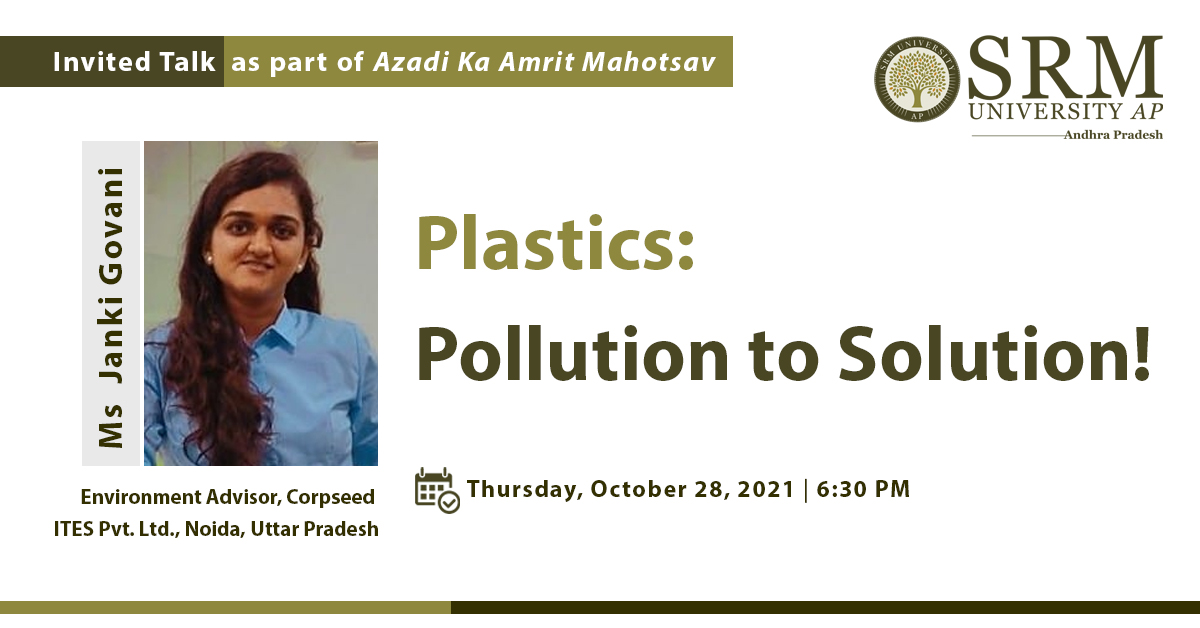 As a part of the “Azadi ka Amrit Mahotsav” campaign, the Department of Students’ Affairs at SRM University-AP is organising an awareness programme to avoid the threat of single-use plastics. Ms Janki Govani, Environment Advisor at Corpseed ITES Pvt. Ltd will be the guest speaker of the event scheduled to be held on October 28, 2021, at 6.30 pm.

Between 4 and 12 million metric tonnes of plastic enter the ocean each year due to rising plastic production, low recycling rates, and poor waste management—enough to cover every foot of coastline on the earth! In the next 20 years, that figure is expected to quadruple. Plastic pollution is one of the most serious threats to the health of the world’s oceans. However, there are a variety of plastic pollution solutions that you may get involved in. Join this engaging webinar to know more!

Tune in to this informative awareness programme on plastic pollution on October 28, 2021, at 6.30 pm. 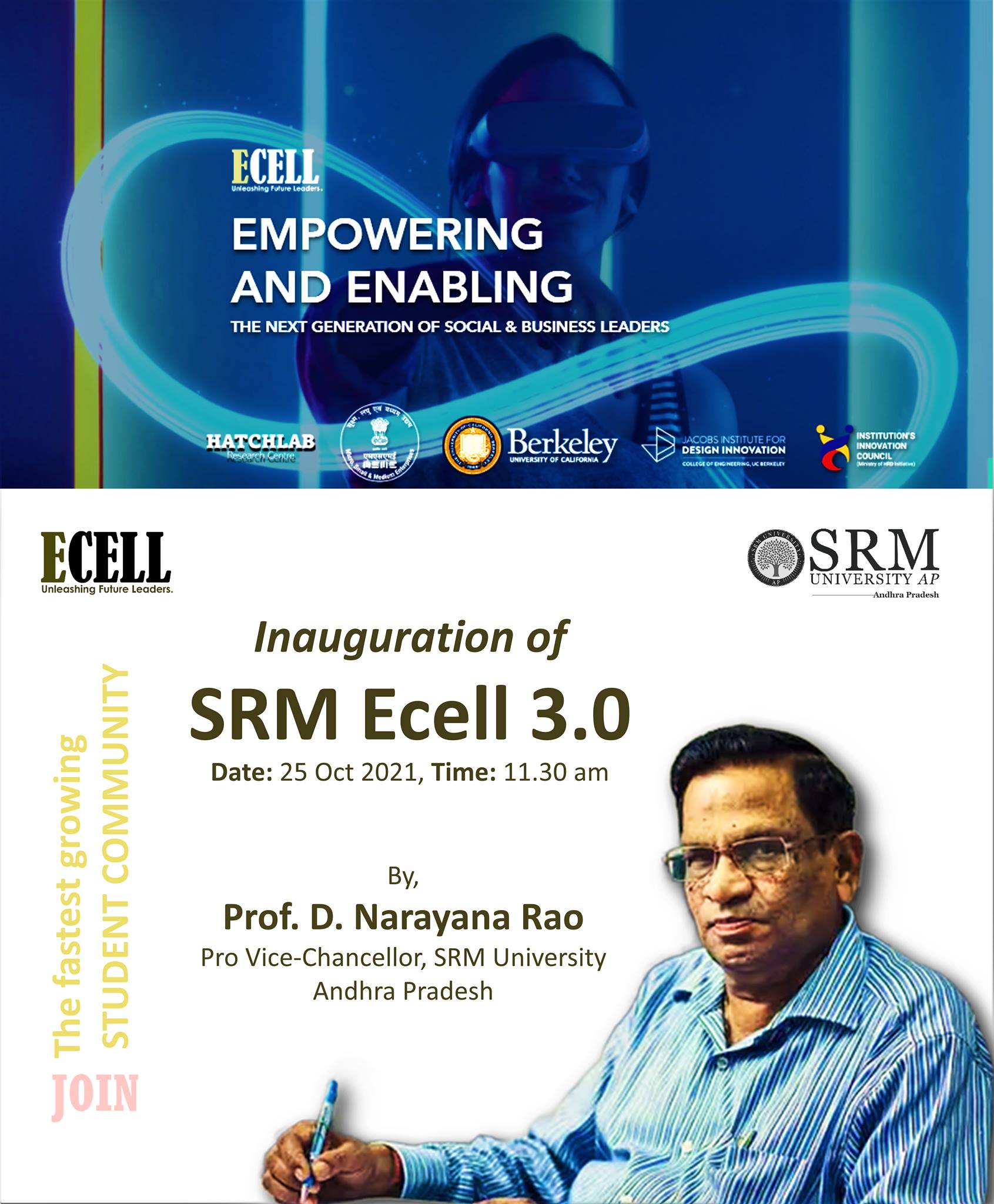 Upscaling and Innovation are two of the most integral components of Entrepreneurship.

So hope all of you are ready for even more breathtaking roles and many more latest spectacular initiatives. Technology makes life easier for us in many ways. The student community of SRM E-cell has taken this initiative to reimagine data interaction.

We are honoured to state that the Inauguration Ceremony will be graced by our honourable Pro-Vice-Chancellor, Prof D Narayana Rao.

The inauguration ceremony is scheduled for October 25, 2021, at 11.30 am (IST). The latest SRM ECell microsite will also be unveiled during the event.

We look forward to your gracious presence that would add vibrancy to the entire event. 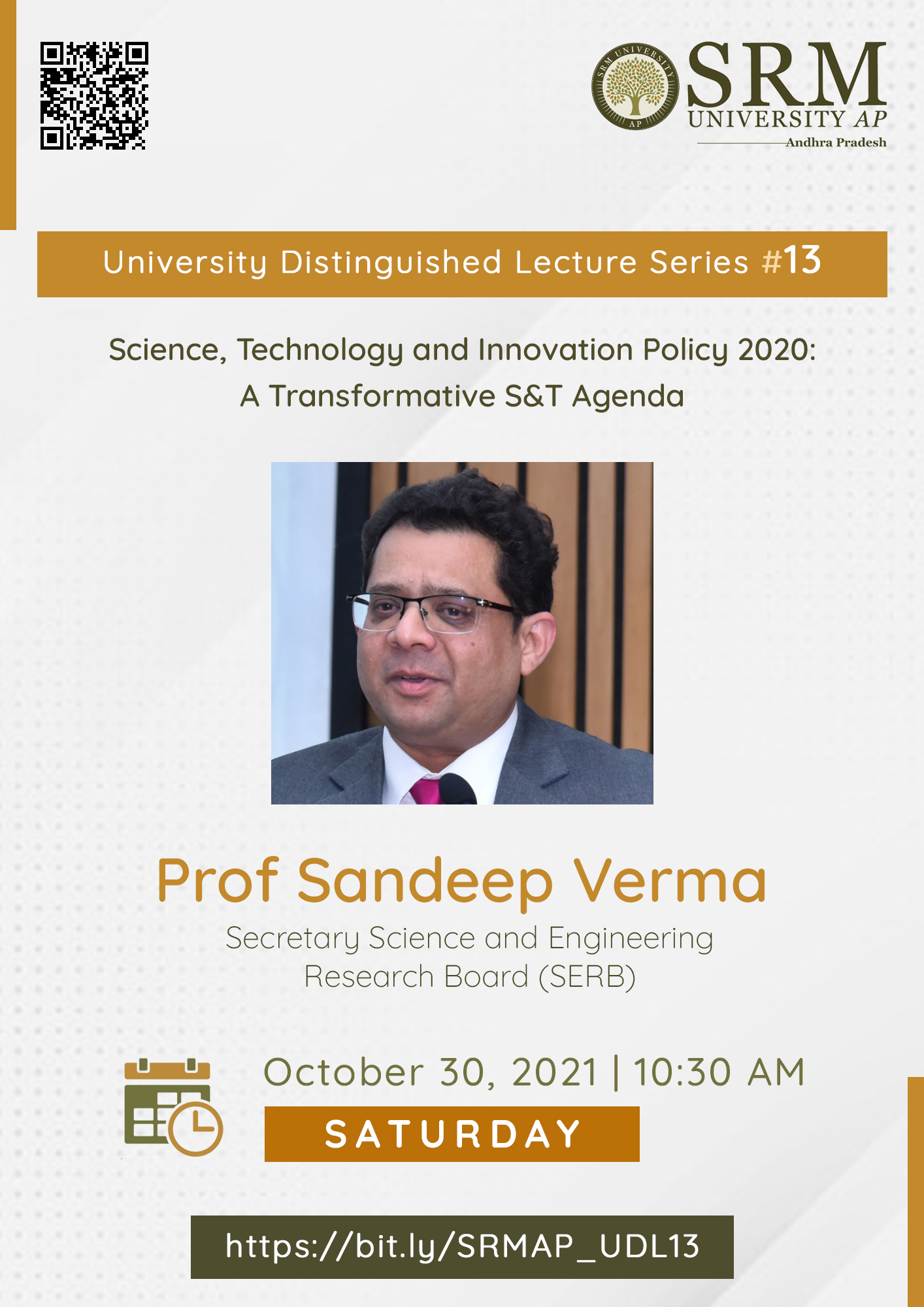 SRM University-AP is bringing forth the thirteenth edition of the University Distinguished Lecture on October 30, 2021, Saturday at 10.30 am. The globally established Dr Sandeep Verma, known for his contribution to the fields of bioorganic chemistry and chemical biology, will deliver a lecture on Science, Technology, and Innovation Policy 2020: A Transformative S&T Agenda.

Dr Sandeep Verma is a member of the Science and Engineering Research Board (SERB), a statutory body established by the Parliament of India in 2008. He took charge as the secretary of SERB in 2019. SERB aims to accelerate research in Scientific and Engineering fields at a global scale by providing funds through calibrated funding for researcher mobility, awards, and honours to name a few.

Dr Sandeep Verma reserves the credit for the synthesis of enzyme mimics using metal-mediated systems. His group is engaged in developing bio-inspired soft matter and protocols for using biological building blocks as diagnostic tools for diseases.

Dr Verma received his master’s degree from Benaras Hindu University and then went for a PhD in the University of Illinois Medical Center, Chicago, USA. He went for two post-doctoral research, first at Johns Hopkins Hospital and the second at Max Planck Institute for Experimental Medicine, before returning to India to join the Indian Institute of Technology as an Assistant Professor. Dr Verma serves as an affiliated faculty in the Department of Biological Sciences and Bioengineering, Center for Nanoscience, and Center for Environmental Science and Engineering at IIT, Kanpur.

Additionally, Dr Verma is an elected fellow of the National Academy of Sciences, India, the Indian Academy of Sciences, the Indian National Science Academy (INSA), and a Senior Fellow of the Zukunftskolleg, University of Konstanz, Germany. The Chemical Research Society of India awarded him with a Silver Medal in 2017. He also received the National Prizes for Research on Interfaces between Chemistry and Biology (2017).

Along with it, Dr Verma is an Associate Editor for Chemical Communications (Royal Society of Chemistry, UK). He is also a member of the Editorial Advisory Boards of ChemBioChem, Cell Chemical Biology, and Journal of Peptide Science.

In 2010, Dr Sandeep Verma was awarded one of the highest Indian awards in the field of Science, the Shanti Swarup Bhatnagar Prize by The Council of Scientific and Industrial Research. Dr Verma won the Jawaharlal Nehru Memorial Fund Award, P. N. Bhargava Medal and BHU Vice Chancellor’s Gold Medal for academic excellence in master’s degree examination, and the J. Watumull Endowed Award of the University of Illinois at Chicago. He won the B. M. Birla Science Prize (2003), Swarnajayanti Fellowship (2005) in Chemical Sciences, and Bronze Medal (2005) of the Chemical Research Society of India.

It is an honour and an incomparable opportunity for all to have such a distinguished guest in our midst and to learn from him. The University Distinguished Lecture (UDL) hosted by SRM University-AP is attended by about 2000 members from IITs, NITs, IISERs, Universities/Institutions, CSIR, DST, DBT, DRDO, DAE, ISRO, NARL, MoES and several others from different parts of the country.

SRM University-AP cordially invites everyone to the thirteenth University distinguished Lecture that will promote transformative Scientific and Technological innovations on October 30, 2021, Saturday at 10.30 am. 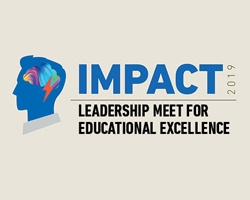