Ms Aayushi Sharma, the resident Student Counsellor, is bringing forth an exciting interactive session on Test Anxiety and Learning Styles on November 20, 2021, at 6.00 pm IST.

With exams facing this way, the cool season could get a little sweaty unless we learn to curb our stress and anxiety. So instead of dreading the ticking clock, it is time to command it. How well we perform in examinations will depend on how well we have understood our subjects.

An examination is not a comparison with our peers but an opportunity to self-assess. It can make us aware of our weaknesses so that we can work on them. It can also serve as a chance to assess our strengths so that we might build on them. Instead of looking at examinations with a pessimistic outlook if we look at them optimistically, we might even be able to use them as tools to help us as career guides. 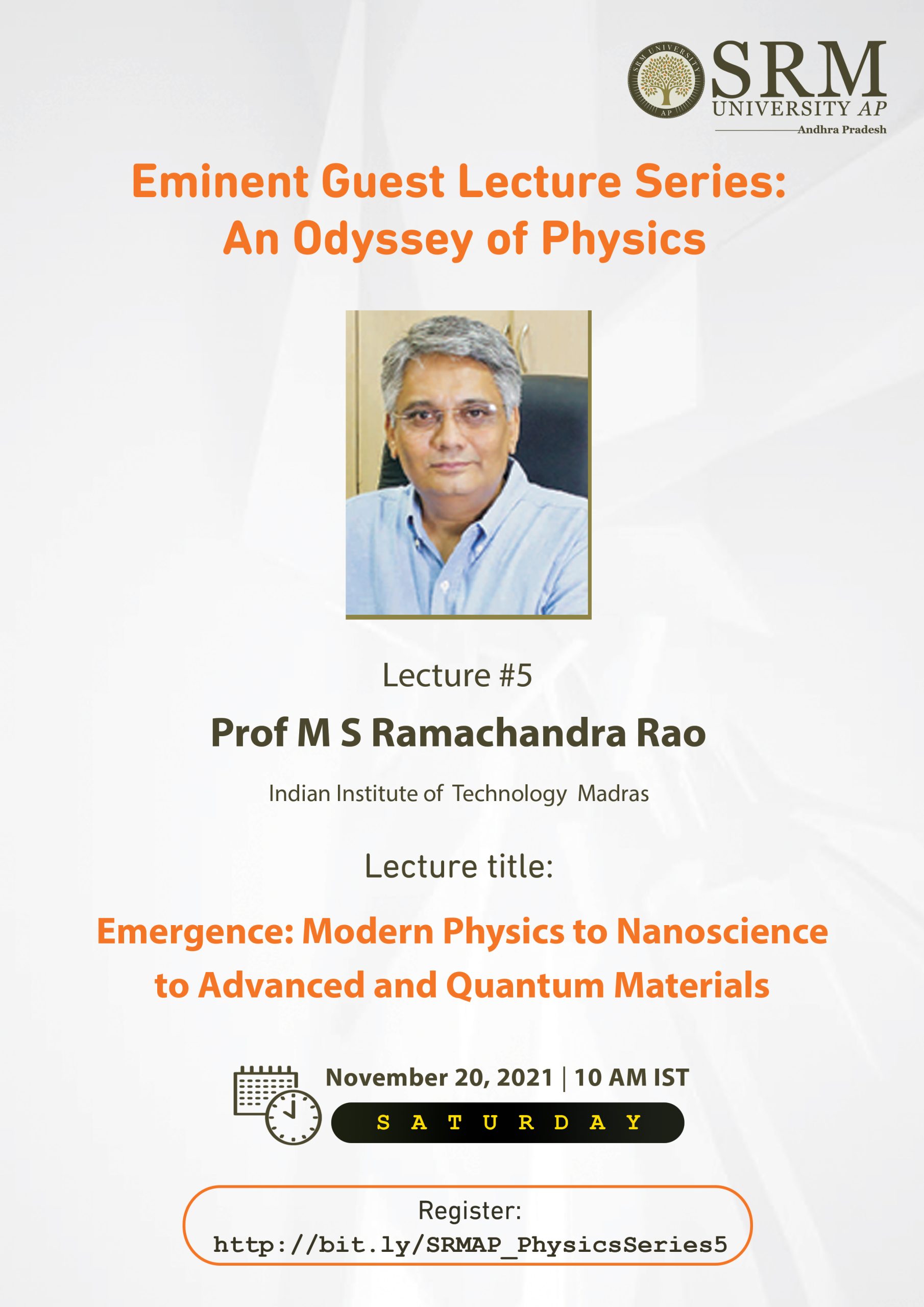 The 5th installment of the Eminent Guest Lecture Series: An Odyssey of Physics is being brought to you by the Department of Physics at SRM University-AP on November 20, 2021
at 10 AM IST. Our eminent guest speaker is Dr M.S. Ramachandra Rao from the Department of Physics, Quantum Centre for Diamond and Emergent Materials (QuCenDiEM), Nano Functional Materials Technology Centre, and Materials Science Research Centre, Indian Institute of Technology (IIT) Madras.

Dr Rao is one of the forerunning researchers in Physics in our country and has been invited by the Nobel Committee for Physics, Royal Swedish Academy of Sciences, to be a nominator in the years 2009 and 2021. He has authored the books “Nanoscience and Nanotechnology: Fundamentals to Frontiers” (Wiley) – Textbook. ISBN: 9788126542017 and “ZnO nanostructures and Allied Materials” (Springer).

Dr Rao obtained both his Master’s degree and Doctorate from the Indian Institute of Technology, Kharagpur. Over the course of his 26 years of teaching and research experience, he has published in over 200 national and international conference papers, 284 international journals, obtained 15 patents and four technology transfers, completed 20 projects, and delivered over 90 talks.

Dr Ramachandra Rao’s research team incubated a company in IITM Research Park (Kapindra). The company deals with diamond coating for industrial/defence/space applications. It is in the process of developing a product for water purification using diamond-coated electrodes. His team won the 1st prize in the DRDO Dare-to-Dream nationwide contest for their proposal to use diamond coatings in hypersonic technologies.

About the talk: Emergence: Modern Physics to Nanoscience to Advanced and Quantum Materials

The beginning of the 20th century has dawned a new era of modern physics with the evolution of a plethora of experimental techniques that include understanding of optical and x-ray spectra, Rutherford scattering, Stern-Gerlach experiment that led to the discovery of electron spin, with simultaneous progress in the fields of superconductivity, magnetism, spintronics, crystallography and the physics of low dimensional systems that in other words is termed as nanoscience which deals with 2D, 1D and 0D systems. We know that matter is made up of atoms, atoms make up crystal lattices, and electronic correlations play an important role in determining the physical properties of materials. I will explain the enormous progress materials science has made and the potential it offers in various technologies. I will talk about the emergence of ‘quantum materials’ and how quantum effects are inherently built-in certain material systems, for example, high-temperature superconductors. I will give examples citing potential applications of functional materials and brief about diamond, the wonder material for futuristic quantum applications. 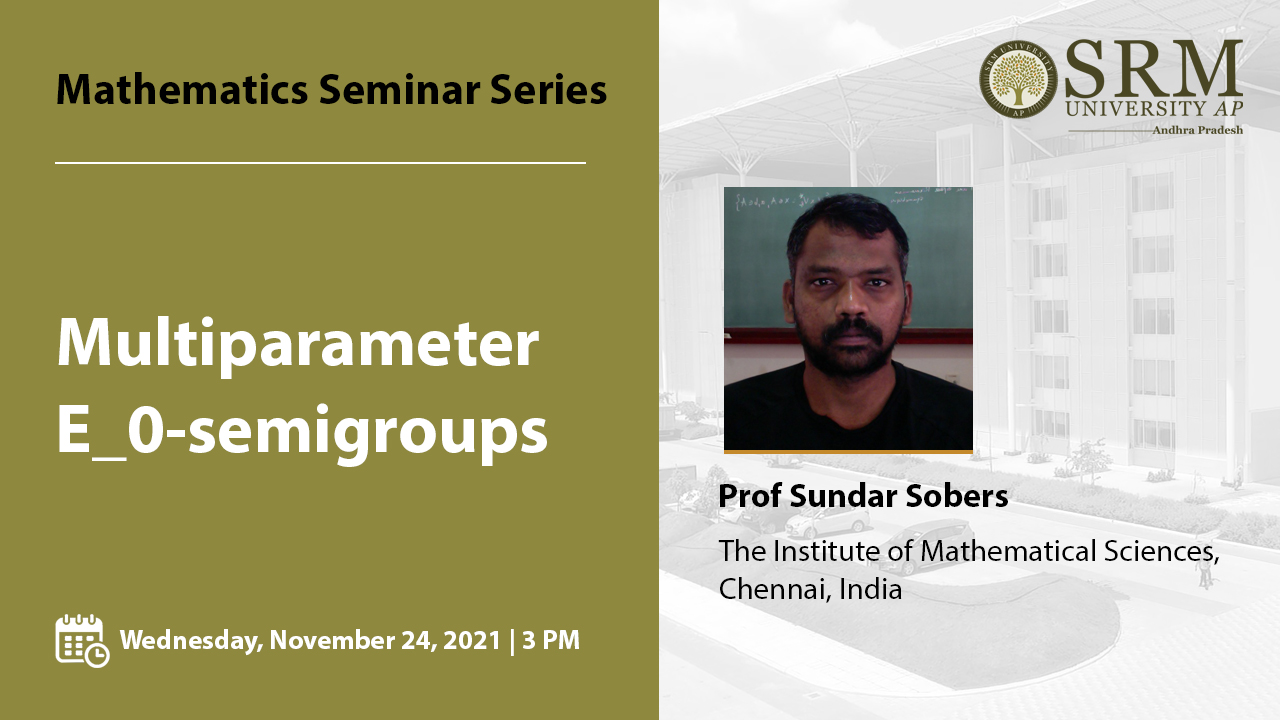 The Department of Mathematics at SRM University-AP is conducting a departmental seminar on November 24, 2021, at 3:00 pm. Prof Sundar Sobers from The Institute of Mathematical Sciences, Chennai, India will engage the participants on the topic “Multiparameter E_0-semigroups”.

Abstract of the lecture:

In the late eighties, Powers initiated the study of the 1-parameter semigroup of endomorphisms on B(H). This was further studied intensively by many others during the last three decades led by William Arveson. Although from the physics point of view, the 1-parameter theory is the most important one, from the mathematical perspective, it is not necessary to restrict oneself to 1-parameter, i.e. the half-line [0,\infty) and we could replace the half-line with any reasonable semigroup’ like convex cones in higher-dimensional Euclidean space. One of the nice features is that the basic theory stays intact while there are significant differences between the 1-parameter theory and the n-parameter theory. I will explain one such phenomenon.

In particular, Prof Sundar Sobers will define the basic examples of E_0-semigroups, i.e. the CCR and CAR flow associated with isometric representations of the semigroup P. In the multiparameter world, CCR flows need not be isomorphic to its opposite, a sharp contrast to the one-parameter situation.

Don’t forget to join this lecture on November 24, 2021, at 3:00 pm which will be helpful to participants who are doing or planning to start a career in the multiparameter E_0-semigroups domain. 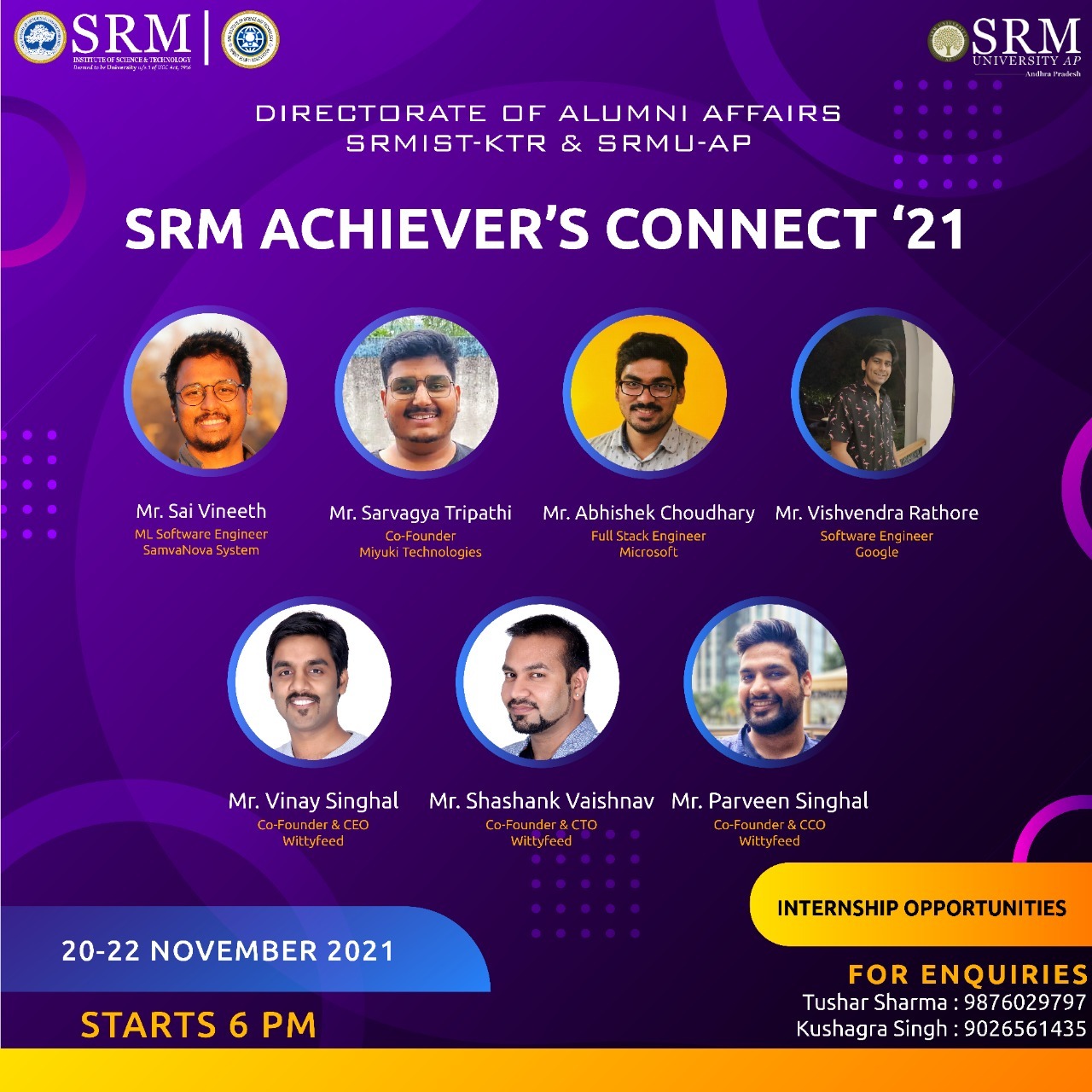 CONNECT today,
TRANSFORM yourself tomorrow.
It’s not just our mission, but our wish for you!

The Directorates of Alumni Affairs at SRM University-AP and SRMIST-KTR brings to you an incredible opportunity to connect with our esteemed alumni and transform your lives from November 20-22, 2021. The Department of Alumni Affairs strives for a life-long relationship between SRM University-AP and alumni to support the growth of university and student fraternity in the various verticals of value-based education, employment, higher education, entrepreneurship etc.

Grab this opportunity to meet with established dignitaries currently active in the Core Industries.

Moreover, get inside knowledge from people who have worked extensively with FAANG companies.

Additionally, get an exciting opportunity in the form of paid internships and what it takes to succeed in the field of Entrepreneurship.

Join us for the 8th edition of SRM Achievers’ Connect to hear your alumni reveal the secrets to achieving new heights. 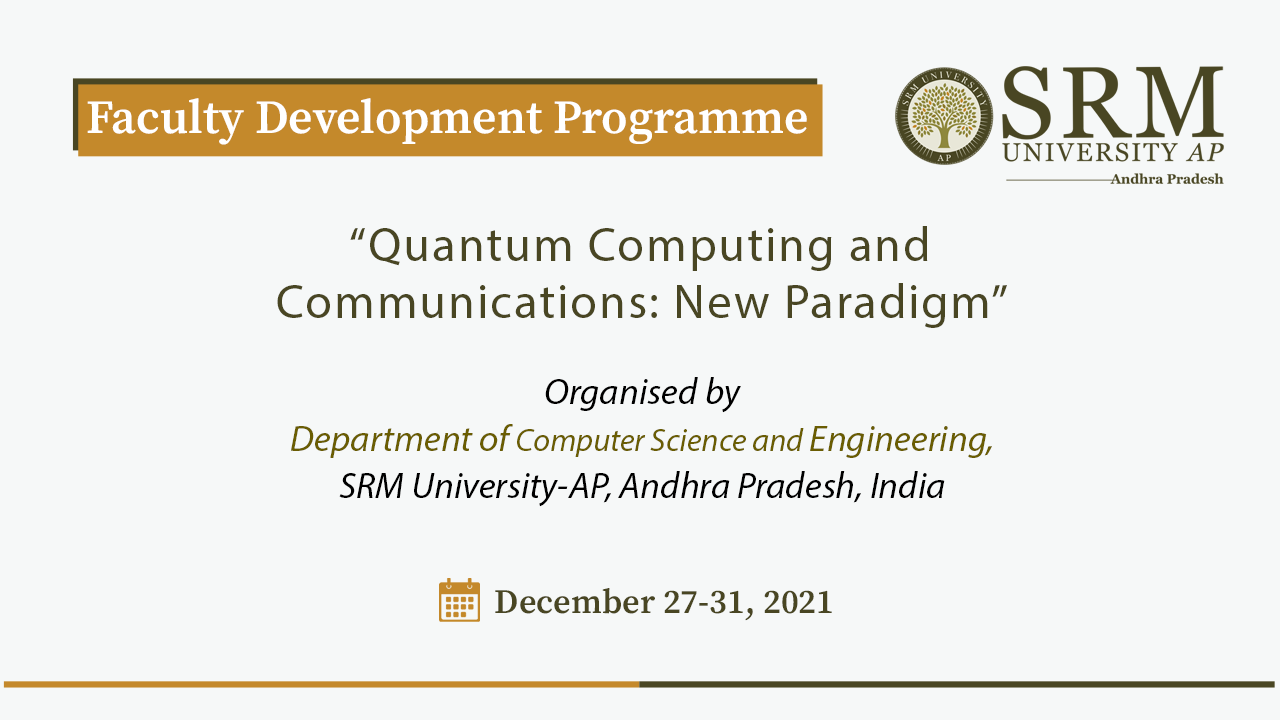 Quantum computing is one of the most significant scientific breakthroughs of the century. The Computer Science and Engineering Department at SRM university-AP is organising an online Faculty Development Programme (FDP) on the topic “Quantum Computing and Communications: New Paradigm” from December 27 to 30, 2021 for scholars from various reputed universities and institutions.

Quantum computing is a new disruptive paradigm based on the principles of quantum mechanics to solve problems in various fields of science that are beyond the possibilities of classical computing infrastructures. Despite, a lot of theoretical research and hardware implementations, the application of quantum computing in solving a computational problem is yet to be explored. In future, a new generation of quantum technologies will drive the development of disruptive devices, services and systems which will primarily impact imaging and computing of intractable problems, as well as enhance network security.

Avail yourself the opportunity to interact with the brightest minds in academia from 27 to 30 December 2021.