Unravelling the perceptions on Time!

Unravelling the perceptions on Time! 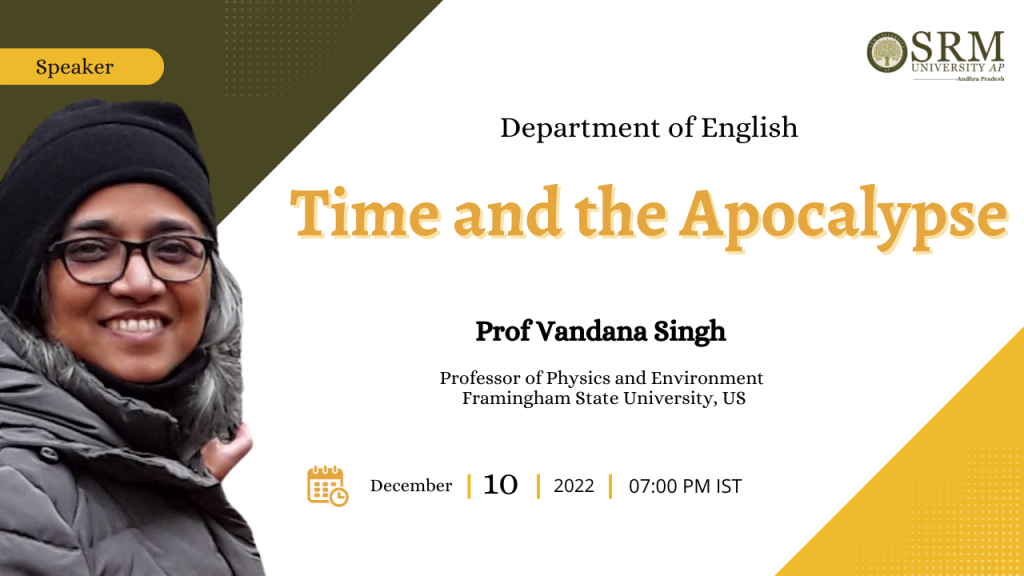 Humankind has always been enthralled by the ever-intriguing concept of Time and its perceived nature. This complex phenomenon with the scientific deliberation of its absolute or relative nature, has been extensively discussed in literature, creative arts, and scientific academia. The Department of English is organising a webinar titled “Time and Apocalypse” on December 10, 2022. Distinguished writer and physicist Prof. Vandana Singh is the keynote speaker of the session. Dr Soni Wadhwa, Assistant Professor, Department of English, who is teaching the open elective course titled Time Travel Narratives (that includes Prof Singh’s two time travel stories as well) would be engaging Prof Singh in an interaction. The webinar will expound on the tenets of Time and its cultural notions in perceiving modern-day crisis phenomena such as climate change.

“Time” is one of the most used words in English, but it is also one of the least understood and most perplexing – as a phenomenon as well as an idea. In this talk, Prof. Vandana Singh will explore the physics of time while focusing on the two extreme views of time, absolute and relative. The view held by Isaac Newton is that time is absolute and it has also taken root in different cultures as the only truth about time. The view held by Albert Einstein is that time is relative, a subject that has inspired much speculative fiction and science fiction films such as those dealing with time travel. Prof Singh will talk about these different views of time as well as alternative cultural conceptions that offer new insights as we confront modern-day apocalypses such as the unfolding horror of climate change.

Prof. Vandana Singh is an Indian science fiction writer and physicist, and a professor of physics and environment at Framingham State University in the US. While her background is in theoretical particle physics, her current academic work is on a transdisciplinary conceptualization of the climate crisis. She is a 2021 Climate Imagination Fellow at Arizona State’s Center for Science and the Imagination, where, along with three other international science fiction writers, she worked on climate fiction in the lead-up to the UN COP 26 Climate Conference in Glasgow in November 2021. Her book of short stories Ambiguity and Other Machines was a finalist for the 2019 Philip K. Dick Award and the Crossword Book award. She is a winner of the Carl Brandon Parallax Award for her novella Distances. Her work has been published in numerous magazines and anthologies and has frequently been reprinted in Year’s Best anthologies.

Join the webinar for an exciting session on the complexities and challenges of understanding Time!