In the heart of one of the world’s leading economies, a major transformation is underway. A recent redrawing of state boundaries has named Amaravati the new capital city of the Indian state of Andhra Pradesh. A wide-ranging master plan calls for the city to be completely redesigned into one of the world’s most sustainable and smart cities, blazing a path for the entire country. Meanwhile, a burgeoning university in Amaravati has chosen its inaugural leader to guide it into the future.

Dr. Jamshed Bharucha, a distinguished academic leader in the United States, has been chosen to lead SRM University, AP - Amaravati, a new research university in Amaravati. He will become the university’s founding Vice Chancellor, departing the Ivy League to contribute to the explosive growth and reform of higher education and research underway in India.

While the first crop of undergraduates in the School of Engineering and Applied Sciences at SRM University, AP - Amaravati have just completed their first year of classes, the expansion is just beginning. The School of Liberal Arts and Basic Sciences has just been launched, and Dr. Bharucha will be at the helm in time to welcome them. The university’s commitment to the city planners is to open schools of management, medicine, and law over the next few years, growing the student body to 10,000 in five years and 25,000 in 10 years. Located by the river Krishna, the city will occupy 217 square kilometers and will be designed to the highest standards of sustainability. Plans call for 60 percent of the city to be dedicated to either green spaces or water, encouraging water taxis, electric cars, and walking. Like the city it calls home, SRM University, AP - Amaravati is poised for metamorphosis under Dr. Bharucha’s leadership.

As the chief executive of the campus, Dr. Bharucha’s role will be to provide strategic vision in pursuit of excellence in education, research, and engagement, responding to the complex opportunities and challenges of becoming a globally recognized and nationally transformative institution. The emphasis will be on multi-disciplinary approaches, for which Dr. Bharucha is well-positioned given his own research bridging cognitive neuroscience and music.

The Amaravati campus is the most recent, progressive, and ambitious of several SRM University campuses founded by entrepreneur Dr.P. Sathyanaranan, who as President of SRM Trust has committed up to $460 million to establish the Amaravati campus. “Dr. Jamshed Bharucha is a highly accomplished academic leader and we are thrilled to welcome him as Vice Chancellor,” said Dr.P. Sathyanarayanan, who serves as President of the group of SRM University campuses and led the search committee that selected Dr. Bharucha. “I am confident he will excel in this role not only in light of his wide-ranging experience, deep expertise, and intimate familiarity with our opportunities and challenges, but also because of his passionate commitment to helping universities, and everyone within them, serve the world at large.”

Dr. Bharucha has held a variety of academic leadership positions, including President of The Cooper Union for the Advancement of Science and Art, Provost and Senior Vice President of Tufts University, and Dean of the Faculty of Arts and Sciences at Dartmouth College, where he became the first Indian-American to be named dean of a school at an Ivy League university. While on the faculty at Dartmouth, he was the John Wentworth Professor of Psychological & Brain Sciences, and received the Huntington Teaching Award and the Undergraduate Teaching Special Award (given by the Student Assembly). He is currently a Distinguished Fellow at Dartmouth College.

“This is a pivotal moment in time for Amaravati – one full of extraordinary possibilities and opportunities to pursue new knowledge, challenge the status quo, and ultimately serve the greater good by enhancing access to education,” said Dr.Bharucha. “Such a time calls for a shift in strategic thinking, flexibility, and freedom to encourage and ignite the curiosity of young minds. I am looking forward to hitting the ground running in my mission to keep this university moving ambitiously forward by inspiring our community of students and faculty to realize their dreams.”

Dr. Bharucha joins a growing number of scholars who are drawn to new and exciting opportunities at international academic institutions. Dr. Subra Suresh, for example, became president of Nanyang Technological University in Singapore earlier this year after serving as president of Carnegie Mellon University. Drs. Bharucha and Suresh are not alone in their pursuit of international opportunities.

Born and raised in Mumbai, Dr. Bharucha worked as a computer programmer at his father’s engineering firm while in high school. He came to the U.S. to attend Vassar College, where he majored in Biopsychology. He then went on to receive a Master of Arts in Philosophy from Yale University, and a Doctor of Philosophy in Cognitive Psychology from Harvard University. He also earned an Associate’s Diploma (ATCL) in violin performance from the Trinity College of London (International Exam Board). He has received numerous research grants from the National Science Foundation in the U.S., and has been a Fellow at the Center for Advanced Study in the Behavioral Sciences at Stanford University. He received the Distinguished Achievement Award from Vassar College, where he serves on the Board of Trustees, and the Pride of America award from the Carnegie Corporation of New York. His past research has focused on the cognitive and neural basis of the perception of music, employing computational neural net models, behavioral experiments and functional MRI. More recently, his research has been on data-mining approaches to understand the comparative financial positions of American colleges.

Under Dr. Bharucha’s leadership, the university will embark on a new era, laying the foundation for a bright future on the path to academic discovery and lifelong learning. 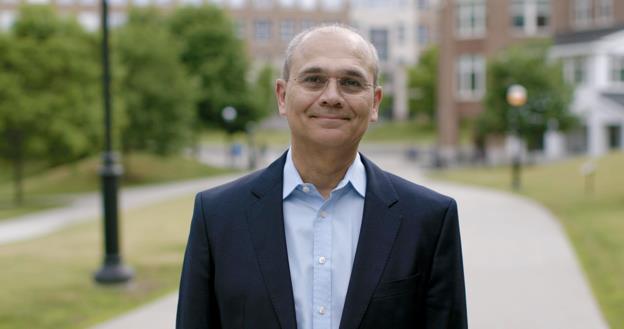