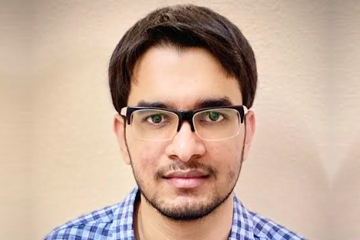 Rohan has decided to join the MS in Computer Science programme at Arizona State University. He plans to prepare a thesis and focus his research on the field of machine learning. He wants to explore and address the challenges of designing efficient deep learning algorithms for space exploration through telescopic imagery. He is also interested in doing a few courses on theoretical computer science.

For selecting universities, Rohan started by acquiring a list of reputed universities from the QS Rankings website. Then he shortlisted universities by focusing on the course curriculum, faculty, and resources for student research. He has completed his bachelor’s degree at SRM university-AP with a major in Computer Science and Engineering and a minor in Physics.

The mentorship of accomplished faculty has helped Rohan build strong foundational knowledge in his discipline. Through the course projects, UROP, and the Capstone Project, he has developed research skills and built a compelling profile essential for admission to leading universities in the USA. He expressed his gratitude to his professors and mentors, Prof Dr Ragunathan T, Dr Jatindra Kumar Dash, and Dr Murali Krishna Enduri, for their relentless guidance. He is immensely grateful for the opportunities that he received from SRM university-AP.