Learn the abilities of Self Improvement and Stress Assessment 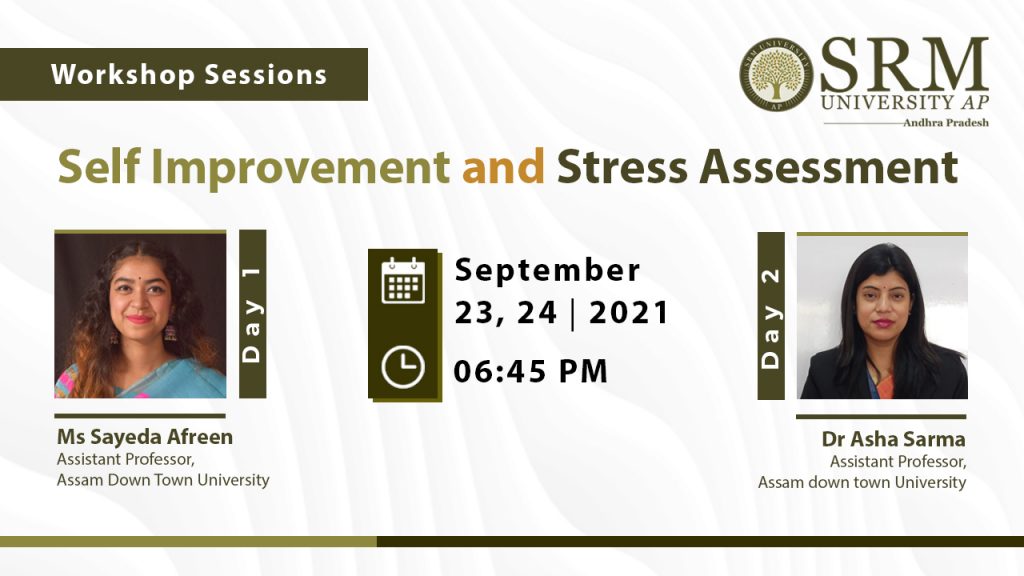 Taking care of yourself will help maintain your physical, emotional, and mental reserves to prevent and manage stress. Effective stress management helps you break the hold stress has on your life to make you happier, healthier, and more productive. The ultimate goal for one is to have a balanced life, with time for work, relationships, relaxation, and fun—and the resilience to hold up under pressure and meet challenges head-on.

An exciting and vibrant college life also comes with various challenges that a student needs to deal with. This, in turn, also contributes to stress, one’s self-esteem issue and coping mechanism. These factors can escalate and hamper a student’s academic performance, emotional and social well-being. Students are very likely to face some or many stressors that may test their adaptability, including adjusting to a new environment, balancing heavy workload, making new friends, becoming more independent and dealing with other issues. These complicated years can also have the presence of stress, low self-esteem and anxiety, due to which there is a dire need for Self-awareness and Stress management among college-going students. Self-improvement is the improvement of one’s knowledge, status, or character by one’s own efforts. It is the quest to make an individual better in any and every facet of life. Therefore, the topic mentioned above of the workshop is an attempt to help college-going students to have a better understanding of “Self” and general underlying causes of “Stress” in order to work towards Self-Improvement and Stress Assessment. 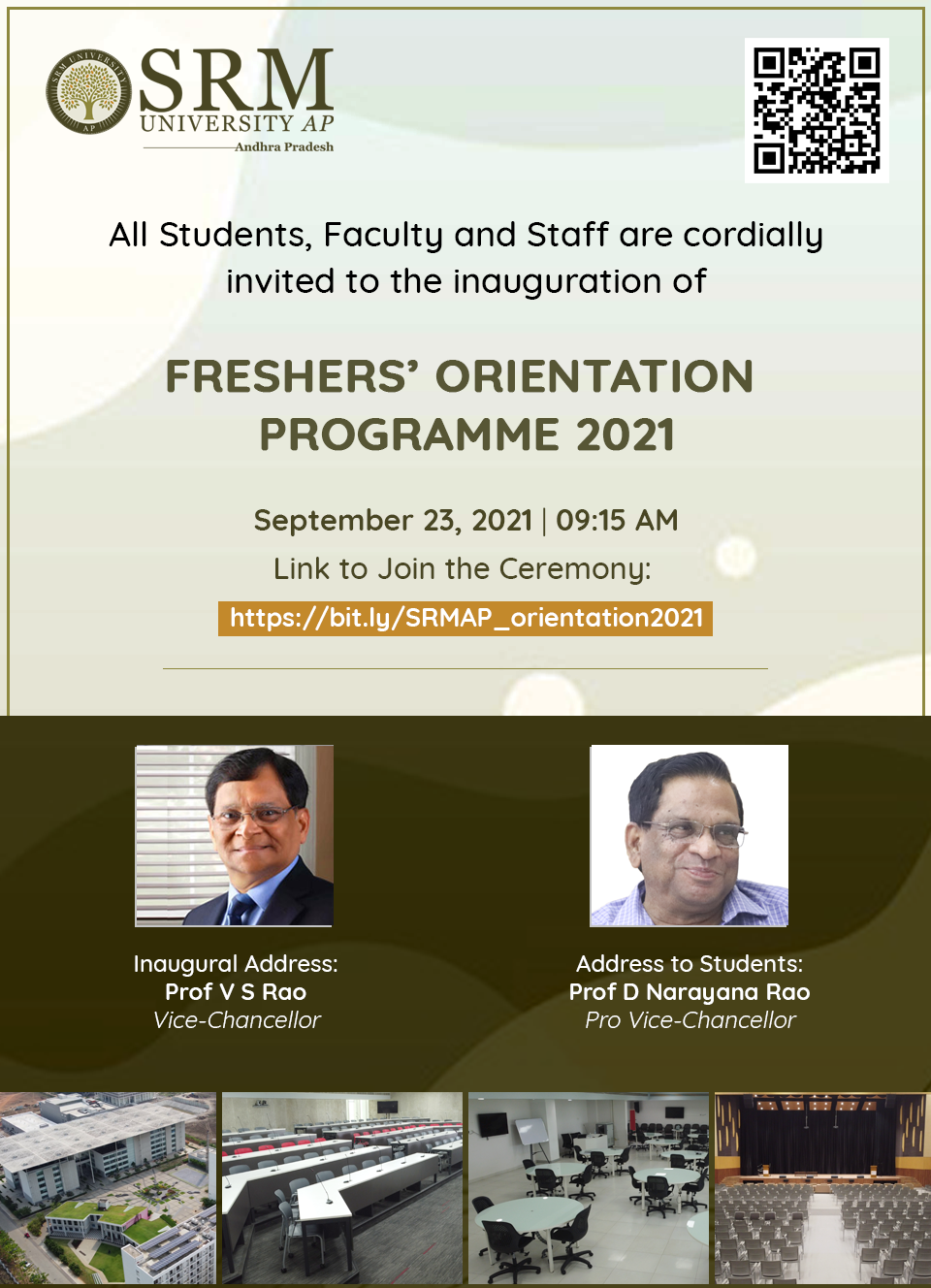 Starting University life can produce a lot of anxiety in a new student’s heart– “What should I study in college? Will I be able to make any friends? If I have a question, who should I contact?” Orientation programmes for freshers are designed to help students answer all of these concerns.

SRM University-AP organises the second session of Freshers’ Orientation 2021 from September 23 to 01 October 2021 to expose students to university life and to acclimate them to their new surroundings. The programme will be inaugurated by Vice-Chancellor Prof V S Rao on 23 September 2021 at 9.15 am. Following the inaugural address, Pro-Vice-Chancellor Prof D Narayana Rao will address the students welcoming them to the university as the newest members of the SRM community.

Students will be made aware of possibilities to socially integrate into the university culture during orientation. All students, faculty and staff are invited to attend the inaugural session of Freshers’ Orientation on September 23, 2021, at 9.15 am. 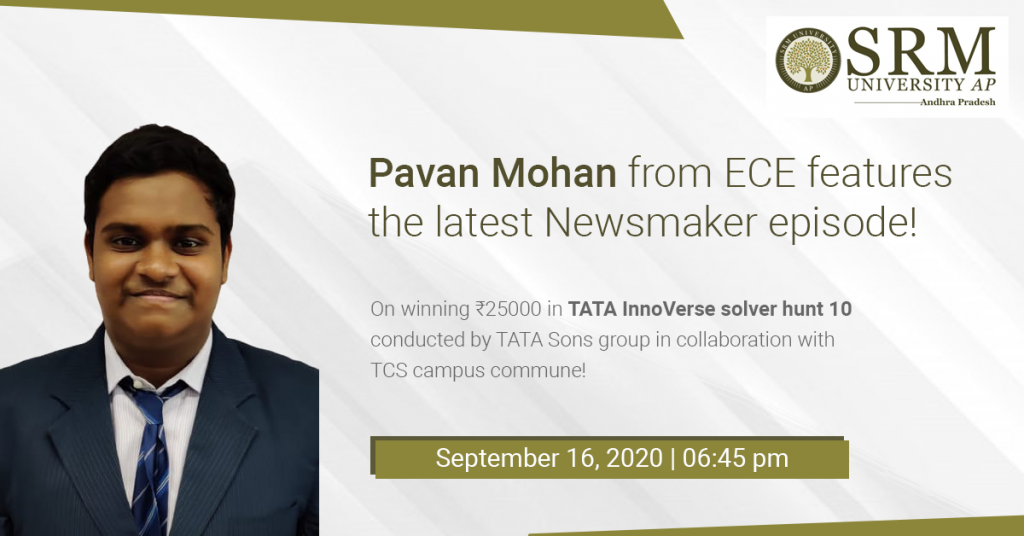 The Newsmakers series is popular among Gen Z for various reasons. The Department of Student Affairs started this series to inspire the students of SRM University AP with motivating stories from their peers. Recently, Pavan Mohan, an undergraduate student from the Department of Electronics and Communication Engineering, has received a monetary award of Rs.25000/- for winning TATA InnoVerse SolverHunt 10 conducted by Tata Sons’ Group Innovation. He will be featured on “The Newsmakers” to share his experience of the competition on September 16, 2021, at 6.45 pm. the event will be live-streamed on our official social media platforms.

Tata Innoverse SolverHunt is one of the key projects of Tata Group that is aimed to use the ingenuity and agility of young minds to speed up the process of discovering solutions to some of Tata Companies’ most difficult challenges. Tata InnoVerse SolverHunt was created by Tata Sons’ Group Innovation to provide a platform for young minds to participate in collaborative problem-solving.

Join the exciting session today at 6.45 pm and learn more from Pavan himself. 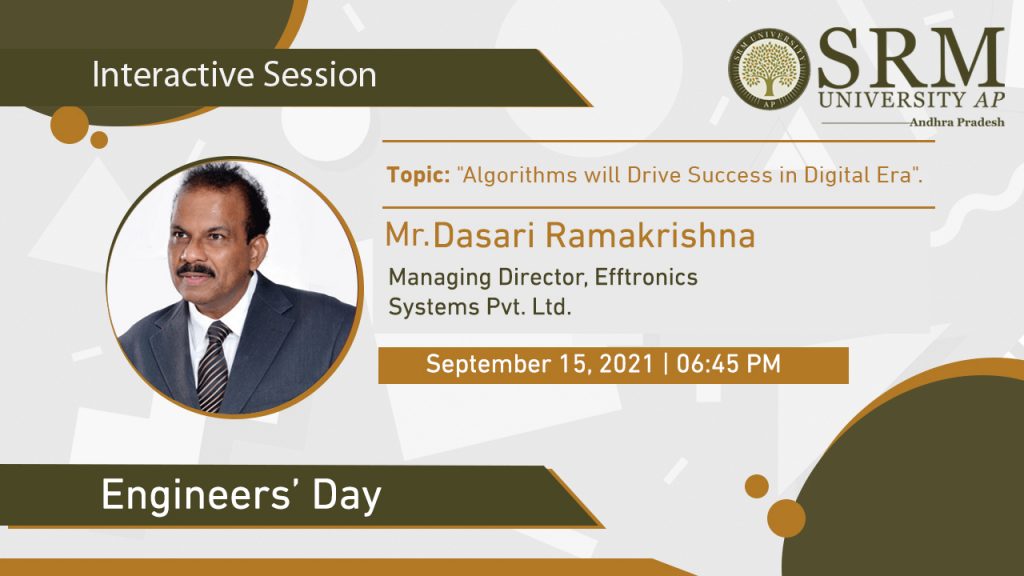 The heartbeat of the Fourth Industrial Revolution is algorithms. While algorithms are not new, the transition of businesses to be algorithmic is game-changing. Mathematicians describe an algorithm as an encapsulated set of rules that act on data to determine an outcome. In today’s digitalized world, companies use algorithms on a daily basis to influence and support decisions (fact-based decision making). In system development, algorithms building is the most challenging and major activity. Often engineers are expected to build completely new algorithms which are not available in the market (internet). One should adopt commonly available algorithms when required. But what is more important is to use various algorithmic concepts/principles together in combination to build a new algorithm. Like any development, algorithms building also follows the cycle of defining, analysing, designing, implementing, and testing iteratively in a systematic way. If one had to build algorithmic thinking, they need to practice with different scenarios, reflect upon the results and experiment continuously.

Every year on September 15, India commemorates Mokshagundam Visvesvaraya’s accomplishments by observing National Engineers Day. Visvesvaraya, the Bharat Ratna awardee, was born in the Karnataka village of Muddenahalli on September 15, 1861. As a pioneer in engineering, he made numerous contributions to the infrastructural backbone of the country.

About the Speaker:
Mr Dasari Ramakrishna is the founding CEO of Efftronics Systems Pvt. Ltd., established in 1985. Backed by rich R&D, Efftronics is now a leading provider of smart solutions for railway signalling, smart cities, smart buildings and industries. He is the architect of one of India’s largest IoT networks built for Indian railways with more than 6 million things connected across 9000 locations. He is a continuous learner & thought leader. Under his leadership, Efftronics has innovated more than 50 solutions for different domains. By continually growing Efftronics, Mr Ramakrishna has proved to the Indian industry that “With right aspirations and sincere effort to deliver value to customers, it is possible to be successful and location doesn’t matter.” He is the former chairman of CII- A.P State Council. He serves as a member of the board of studies, academic councils and governing body for several educational institutions and advisor for various universities.

Join this rekindling session on September 15, 2021, at 06.45 pm to understand the complexities of algorithm building.

Liza Hazarika to usher in the Powers of Mind 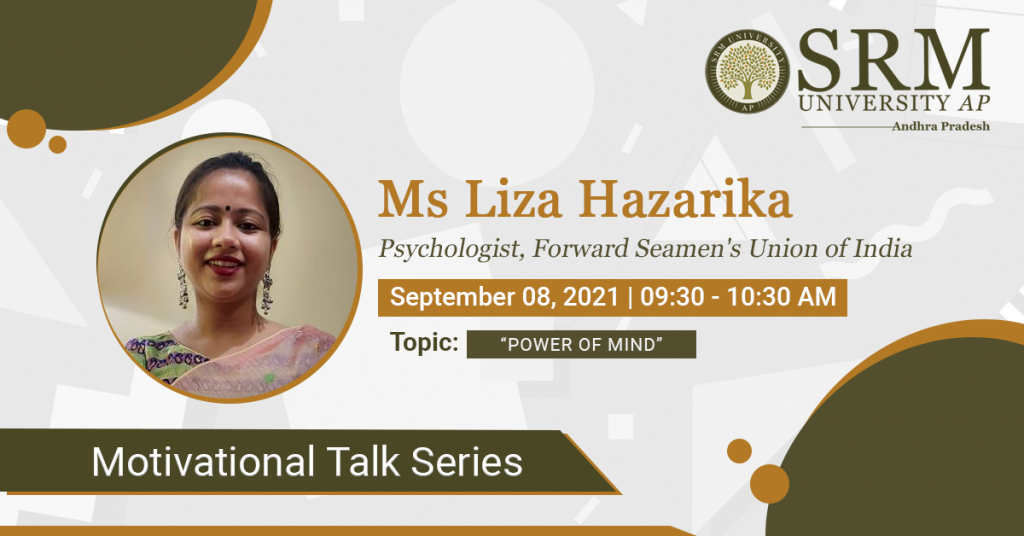 Ms Liza Hazarika is joining the Freshmen Orientation Programme-2021 on September 08, 2021, at 9.30 am to deliver an interesting talk on “Power of Mind”.

Ms Liza Hazarika is currently working as a psychologist with Forward Seamen’s Union of India and is also associated with Pratishruti Cancer and Palliative Trust as a volunteer and psychologist.

Ms Hazarika is a certified Spiritual therapist from Amrit Asmi Institute. She believes in a holistic approach to treatment. She is the founder of Call For Healing, a space for spiritual practices. Ms Hazarika is also actively involved in several Non-Governmental Organizations working in areas of mental health. She has done her Master’s in Clinical psychology and Bachelor’s in Psychology from Handique Girl’s College, Guwahati. 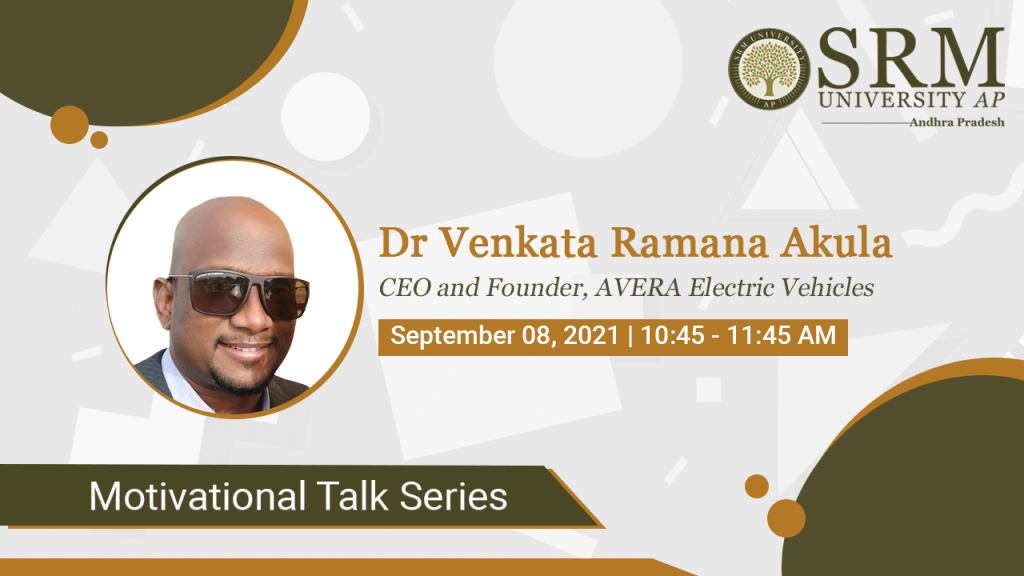 The Freshmen Orientation Programme 2021 brings another exciting session with Dr Venkata Ramana Akula, Founder & CEO, AVERA, on September 08, 2021, at 10.45 am.

Dr Ramana AVE, an innovative and performance-driven entrepreneur with a deep passion for technology and business, led the development of India’s first largest electric scooter manufacturing unit AVERA at Vijayawada, Andhra Pradesh. Being the Founder & Chief Executive officer for AVERA, he is experienced in managing all aspects of business development, including quality, product development and identifying new segments with growth opportunities. Dr Ramana was the man behind the inception of India’s first high-speed electric scooter RETROSA. An accomplished businessman with excellent leadership skills, Dr Ramana, is known for delivering substantial revenue and profits gained in a highly competitive market.

Join the session to interact with the entrepreneur on September 08, 2021, at 10.45 am to learn more about business ventures and ideas. 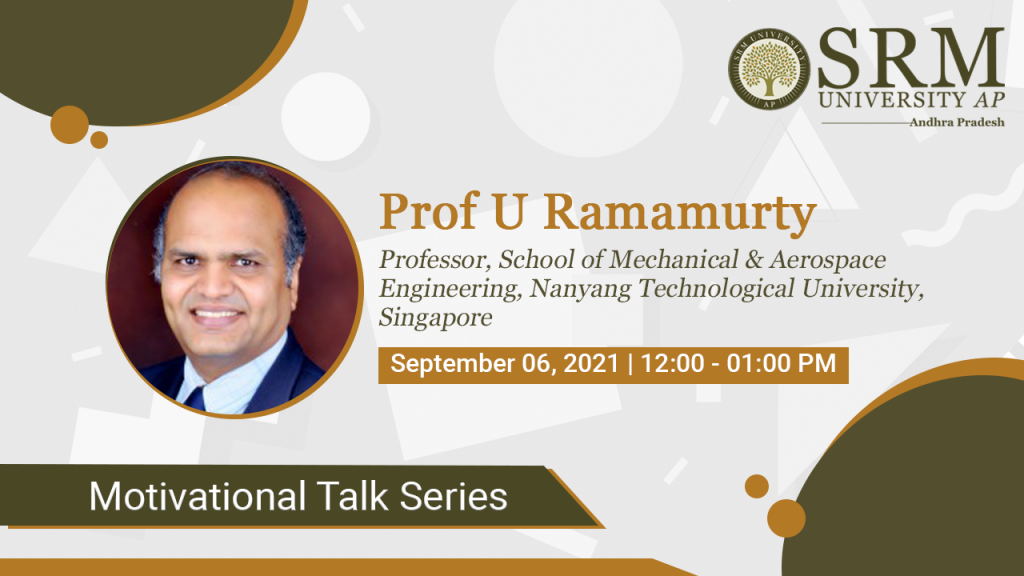 Professor Ramamurty is a widely respected researcher who has co-authored over 250 papers in peer-reviewed international journals that have been referenced over 9000 times (with a Hirsch index of 46) in both the Web of Science and Scopus databases. Several honours, including the Chinese Academy of Sciences’, the Lee Hsun Lecture Award of the Chinese Academy of Sciences, TWAS Prize (Engineering Sciences), CNR Rao Prize Lecture in Advanced Materials of Materials Research Society of India, J.C. Bose National Fellowship and Swarnajayanthi Fellowships of Government of India, Metallurgist of the Year Award by Indian Institute of Metals, and Scopus Young Scientist Award, have acknowledged his research efforts.

Professor Ramamurty is an elected fellow of the Indian National Science Academy, the Indian National Academy of Engineering, the Indian Academy of Sciences, and The World Academy of Sciences (TWAS). He held numerous distinguished/invited professor/scientist positions around the world, including the Institute of Materials Research (IMRE) in Singapore, Zhejiang University in China (Qiushi Distinguished Visiting Professor), Université de Lorraine in France (Exceptional Class Professeur invité), Jawaharlal Nehru Centre for Advanced Scientific Research in India, and the Massachusetts Institute of Technology.

Since 2014, Professor Ramamurty has served as an Editor for Acta Materialia and Scripta Materialia. Professor Ramamurty’s research focuses on addressing fundamental scientific and technological difficulties in the materials/mechanics domains, which have direct implications for advanced manufacturing as well as component structural integrity and reliability.

Professor Ramamurty made significant contributions to the understanding of the mechanical behaviour of advanced metallic alloys, composites, and molecular crystals during the course of a nearly three-decade professional career. The nature of his work is both fundamental as well as applied and hence was continuously supported by industrial giants like Boeing, General Motors and Rolls Royce. 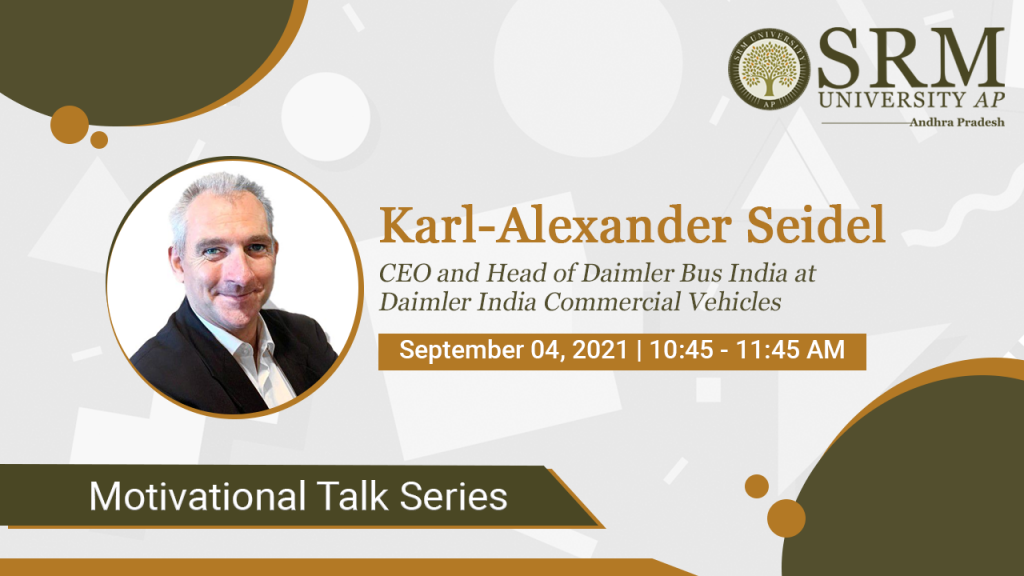 In the next chapter of Freshmen Orientation Programme-2021, a special talk will be delivered by renowned corporate mogul Mr Karl-Alexander Seidel. Mr Alex is the CEO and Head of Daimler Bus, India at Daimler India Commercial Vehicles. The talk has been scheduled for September 04, 2021, at 10.45 am  and aims to provide an insight of the industry and its culture.

Mr Karl-Alexander Seidel started his career at Daimler in 2001. Between then and 2014, he held a variety of management functions in the fields of Reporting, Business Development, Product Planning and Homologation, mainly in Daimler’s commercial vehicles division, as well as at TASIAP GmbH in Stuttgart. Since 2014 he has been working for Daimler in India, where he was initially responsible for powertrain supplier management. Between 2016 and 2017 he was in charge of the “Logistics, Supplier & Quality Management” department at Daimler Buses in India before assuming his current function in 2017.

Mr Karl-Alexander Seidel is a highly competent commercial vehicles manager with many years of India-related experience from our bus business in Chennai. In recent years he has made a significant contribution to building up our Indian bus production activities by implementing corresponding supply and logistics flows, as well as the corresponding quality management.

Dr K Vaithianathan to delve into the need for Games & Sports 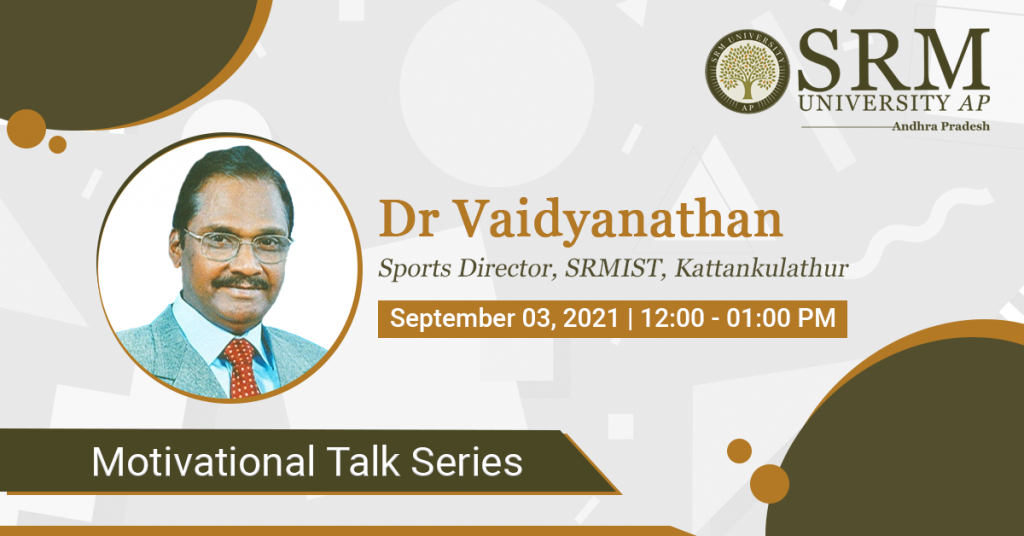 In the next chapter of Freshmen Orientation Programme-2021, SRM University-AP takes the initiative to introduce the students to the need for Sports and extracurricular activities. Dr K Vaithianathan, Director-Sports, SRM Institute of Science & Technology, Chennai, will interact with students on Friday, September 03, 2021, at 12 noon.

Dr K Vaithianathan began his career as a Physical Director in Erode Arts College. He later worked as a faculty in Alagappa College of Physical Education and Pondicherry University. He has also worked as Head, Professor and Director at Annamalai University. He also worked as the Vice-Chancellor of TamilNadu Physical Education and Sports University, Chennai. He joined SRM Institute of Science & Technology as the Director-Sports in 2013 and has brought many laurels to the institute.

As a Sports Professional, Dr K Vaithianathan has achieved many awards and recognitions. He represented Tamil Nadu State, participating in the Madurai Open National Athletic Meet in 1974. He also participated in the Palai All India Inter State Athletic Meet in 1975 and secured places at the State and National levels in High Jump & 110 M.Hurdles. Moreover, under his able guidance and mentorship, many students won medals and awards in national and international championships. The Freshmen Orientation Programme-2021 is thoughtfully designed to provide students with a holistic induction in academics and beyond academic matters. With the pandemic and other stressful things surrounding us, it has become crucial to take care of our mental health. Surprisingly, even today, many people do not understand the importance of mental health and the need to visit a specialist to keep it sound. Today, this critical issue will be discussed by Ms Shipra Dhingra, Psychologist and Art Therapist. On Thursday, September 02, 2021, she will deliver an address at 2.30 pm on “How to know if you need help”.