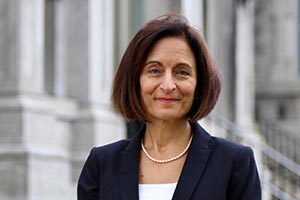 Teresa Abi-Nader Dahlberg became Dean of the College of Engineering and Computer Science and Professor of Electrical Engineering and Computer Science at Syracuse University, a research one university, in 2015.  Dahlberg oversees 100 fulltime faculty, 2,600 students, 10 B.S., 11 M.S., three online and six Ph.D. programs. She is in year two of a plan to hire fifty faculty over five years into interdisciplinary clusters to elevate research.    She has developed the Transforming Our Future: technology is everywhere, but it is not everything advancement campaign; multiple affinity scholars programs to support students’ academic, social, and fiscal wellbeing; an Office of Inclusive Excellence; and she is launching the Strategic Inclusive Excellence Leadership Initiative, a two-year program to introduce intergroup dialogue to engineering.

She was previously Dean of the Albert Nerken School of Engineering and Chief Academic Officer (CAO) of The Cooper Union for the Advancement of Science and Art, New York City.  As dean, Dahlberg led creation of interdisciplinary programs that combine art, design, technology, and science. As CAO, Dahlberg was instrumental in successfully introducing tuition to a university that had been tuition free for over 100 years.

Prior to joining Cooper, Dahlberg was Associate Dean of the College of Computing and Informatics at the University of North Carolina (UNC) Charlotte.  At UNC Charlotte, Dahlberg established the Wireless Networking Research Lab and the Diversity in Information Technology Institute.  She co-founded the STARS Computing Corps, a National Science Foundation alliance for broadening participation.  As STARS Director (2006-2013) Dahlberg led creation of a service-learning program intended to strengthen the K-12 STEM pipeline and the undergraduate computing pipeline and oversaw adoption of the program by 50 colleges and universities nationwide.

Dahlberg has been principle investigator or co-PI for over $20 million in research grants.  She served on the Advisory Committee to the National Science Foundation Computer & Information Science & Engineering (CISE) Directorate (2011-2014), and she co-chaired the CISE Education Workforce subcommittee during this time.  Dahlberg has a B.S. in Electrical Engineering from the University of Pittsburgh (1984) and M.S. and Ph.D. in Computer Engineering from North Carolina State University (1993).  She spent ten years as a development engineer for IBM before joining academia.