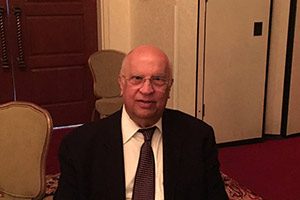 After the first fifteen years of his professional career from 1974 through 1988, when he was General Manager at Combustion Engineering Environmental (now ABB) and previously was President of an engineering services company called Andersen Engineering Services, he voluntarily left the corporate world and became a Serial Entrepreneur in the plastics industry involved in hard core manufacturing of plastic blow molded products. Starting from his first company called Crystal Clear inc. in New Jersey, over a 24 year period, he started, bought, merged and sold several plastic molding companies in New Jersey, Pennsylvania, North Carolina, California and Canada that ranged in size from $5 million to $34 million. He sold his last company in California in 2012/13 and since that time, he has devoted his efforts full-time in philanthropic and non-profit activities.

Mr. Mehta is the current President and Board member of IIT Bombay Heritage Foundation and the former President of IIT Bombay Alumni Association of Greater New York. Mr. Mehta feels very strongly about GIVING BACK to his beloved alma mater, both financially in the form of significant donations and by volunteering to support alumni activities in the US and develop strong brand awareness for IIT Bombay in the US. He has generously contributed towards  Student Scholarships, Financial Aid Program, Chair Professorship in Advanced Education Technology and other worthy initiatives like ‘Teach Ten Thousand Teachers at a Time and ‘Spoken Tutorials’ programs at IIT Bombay. He was instrumental in developing a highly successful Student Exchange Program between IIT Bombay and The Cooper Union in New York City. Mr. Mehta is recognized as a GOLD donor by IITBHF (>$150,000 to $500,000 in cumulative donations to IITBHF).

In his retirement, Mr. Mehta strongly believes in helping the country of his birth – India, by working ceaselessly in non-profit activities in India. He currently serves as the Executive Director of an NGO called Wheels India Niswarth (WIN) Foundation with its main offices in Gandhinagar, Gujarat. WIN is involved in funding innovations in Maternal & Child Health (MCH) and Water & Sanitation (WATSAN) programs with financial support of $2 million a year. In addition, he is a long time Board member and Co-Director of Water for a non-profit called Wheels Global Foundation started by IIT alumni in the US. He has funded and helped start up more than 10 Clean Drinking Water plants (CDWP) in remote impoverished villages in Telangana, Gujarat and Rajasthan. He also serves on the Advisory Board of the Dakshana Foundation. This organization trains the brightest of the bright, but severely economically disadvantaged high school students to take the IIT Joint Entrance Exam. Dakshana has an overall success rate of 60% for students who are supported by Dakshana. More Dakshana scholars gain admission to IITs each year, than any other ‘For profit’ coaching institutes.  Last year over 300+ students gained admission to IITs without having spent a dime for their coaching. Most recently, Mr. Mehta has agreed to serve on the Advisory Board of a new university called SRM University Amravati in Andhra Pradesh.

Until recently, Mr. Mehta was an active Certified Volunteer member of SCORE Central Jersey, a non-profit resource arm of the US Small Business Administration.  As a SCORE volunteer, Mr. Mehta has counseled and mentored a large number of people in New Jersey who wanted to start a business or grow their business. These services were provided to SCORE clients completely free of charge.

In his leisure time, Mr. Mehta loves to spend time with his 4 grandchildren in New York and New Jersey. He is an avid reader and likes to swim almost every day. He fondly remembers from his IIT days, swimming in Vihar Lake frequently with his friends.