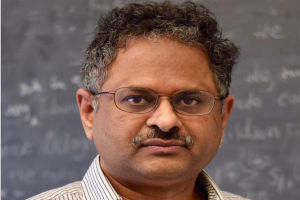 Prasad Jayanti went to Sri Ramakrishna Mission School in Chennai for elementary, middle and high school. After receiving B.Tech. in mechanical engineering from IIT Madras, he earned an MS in mechanical engineering and a second MS in computer science, both from University of Delaware, followed by a Ph.D. in computer science from Cornell University in 1993. Since then he has been at Dartmouth College as a professor of computer science. Prof. Jayanti's research focus has been concurrent algorithms and he was awarded the Alfred P. Sloan Research Fellowship in 1998. He is a two time recipient of the Distinguished Teaching Award - by Cornell University in 1992 and by Dartmouth College in 1999. He was named James Frank Family Professor of Computer Science by Dartmouth College in 2008. He chaired Dartmouth's Computer Science Department during 2004-09, and once more since July 2018.