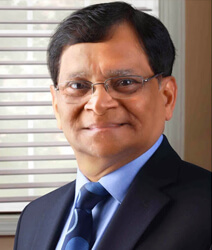 Prof Vajja Sambasiva Rao is an eminent academician who has been the vanguard of leading excellence in higher technical education in India. An alumnus of BITS, Pilani and the University of Bielefeld, Germany, Prof V. S. Rao previously served as the President of NIIT University and Acting Vice-Chancellor and Director at BITS, Pilani.

During his career spanning over forty-two years, Prof V. S. Rao has made significant contributions in the arena of education. As the President of NIIT University (NU), Neemrana, Rajasthan, he has led many initiatives at NU starting from curriculum innovations, faculty expansion and development to the introduction of new Programmes and digital learning. He apprehended the importance of Industry linkage with academia and committed to upholding it. Prior to joining NU, Prof V. S. Rao had a vigorous association with BITS, Pilani for over 44 years including six years of his Graduation.

Before accepting the responsibilities as the Acting Vice-Chancellor & Director of BITS Pilani, Hyderabad Campus; he has held other administrative positions including Deputy Director, Off-campus programme & Dean, Practice School Division amongst others. His prime obligations included student care and mentoring, managing Practice Schools in India and abroad, and Work Integrated Learning Programmes at BITS.

He played a crucial role in the establishment of BITS Pilani, Hyderabad campus in terms of strategy and conception. He worked very closely with Dr Y S Rajasekhar Reddy, the then Chief Minister, in realising his vision of establishing BITS Pilani campus in Hyderabad, a state-of-the-art campus with innovative ideas.
This would not have been possible without the generous support of the secretaries and officials of the Government of Andhra Pradesh. He is credited with building a green campus within eighteen months replicating all the notable features of BITS Pilani with the help of the faculty, staff, alumni & students.

As the Deputy Director, Off-campus programme, he spearheaded business development to increase the number of the collaborative programme as well as allied organisations. The inauguration of the Centre for Entrepreneurial Leadership & Technology Business Incubators both at Pilani & Hyderabad Campuses are one of his many contributions.

Prof. V. S. Rao has been the recipient of "Demonstrated Excellence in Building an Institution" award from the Chancellor, BITS in 2014. He was honoured in BITSAA Global Meet in 2014 for his contribution to "Making Learning a Wonderful Experience". In 2013, he received "Eminent Educationist Award" by Indo Global Educational Council for his achievements in education and honoured for contribution to excellence in education by Telugu Association of North America (TANA), USA.

Prof. V. S. Rao obtained his M.Sc. and PhD degrees from BITS Pilani. In 1998, at the invitation of the German Foundation for International Development, he attended a four-month training programme on Educational Economics & Educational Research at the University of Bielefeld, Germany. His philosophy and utilitarian standpoint as an educator have been moulded by his pragmatic ideology and productive wisdom as an administrator.

Prof V.S. Rao is on the advisory board for various colleges, institutions and universities across the country. He is also an avid explorer who has extensively travelled across the globe to visit international universities of repute.