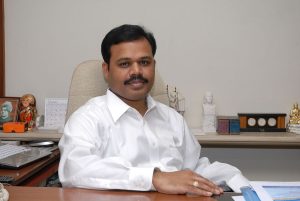 Dr. P. Sathyanarayanan is the Pro-Chancellor of SRM University-AP, a leading world-class university that provides students with a unique educational learning experience. As a young and dynamic entrepreneur, he lives by his motto, “Think big, do big, achieve big”. This governs all his actions and enables him to excel in the fields he ventures into. As the president of SRM University-AP, Dr Sathyanarayanan plays a pivotal role in advancing the university’s academic agenda with input from the faculty, students, staff and alumni. During his tenure as Vice-Chancellor of SRM University from 2003 to 2010, the university grew by leaps and bounds in research and international collaborations. In 2006, the institute attained the status of a full-fledged university and has since been known as SRM University. Under his leadership, SRM University has set up an International Advisory Board comprising eminent academicians from Harvard, Massachusetts Institute of Technology, Kellogg School of Management, and Carnegie Mellon, amongst others. He was also instrumental in the formulation of an International Student Exchange Programme, the establishment of a Centre of Excellence for Empowerment of Women through IT, and the launch of a virtual education programme. The university has received several accolades and recognitions, including accreditations from ABET- USA, National Assessment and Accreditation Council (NAAC) in India.

True to his motto, Dr. Sathyanarayanan has been instrumental in the expansion of SRM’s footprint in higher education in India. He set up a new university in Sikkim in 2013 to cater to the north eastern parts of India. He is currently spearheading the establishment of SRM University- AP in the state of Andhra Pradesh in India.  Envisioned to be a university of world-class standards, SRM University-AP, Andhra Pradesh is to be a globally connected and regionally transformative centre for research and education in the heart of Andhra Pradesh.

Dr. Sathyanarayanan obtained his Bachelors in Engineering from Anna University, Chennai. He completed his Master of Science from Northeastern University in the USA and his doctoral degree from Southern Cross University, Sydney, Australia.

Message from the Pro-Chancellor

We live in an increasingly interconnected world that faces challenges and complex problems on a global scale. At the start of the 21st century, SRM University-AP is uniquely prepared to tackle these challenges through its breadth of scholarship, its entrepreneurial heritage and pioneering faculty.

The era of globalisation means many things to SRM: undertaking research and real-world approaches on issues relating to science and technology; exchanging ideas and collaborating with global universities, and providing overseas opportunities for undergraduates and staff alike.

SRM University has an ambitious plan to build and create a new research intensive university in Andhra Pradesh. Envisioned to be a university of world-class standards, SRM University-AP, Andhra Pradesh is to be a globally connected and regionally transformative centre for research and education at the heart of a new, modern, vibrant metropolis. At this pivotal moment in its history, SRM stands united in its commitment to building excellence across the institution and its aspiration to compete on the world stage.