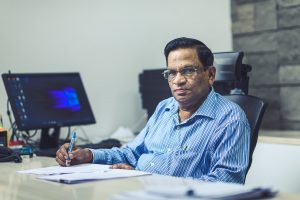 Prof D. Narayana Rao is a renowned scientist in the field of Atmospheric Sciences and Radar Technology. In his career spanning over four decades, he has been widely recognized for building institutions of excellence both in research and academia. Prof. Narayana Rao began his career in academics at Sri. Venkateswara University, Tirupati, where between 1975 to 2002, he taught Physics. He also carried out several major research projects sponsored by Science Department and Agencies of Govt. of India like DST, CSIR, MoES (Formerly DOD), MIT(Formerly DOE),ISRO, and UGC.

He was appointed by the Government of India as Director, National Atmospheric Research Laboratory (NARL) of ISRO/ Department of Space in 2002. Prof Narayana Rao greatly contributed in making NARL a world-class Centre of Excellence for research in frontier areas of Atmospheric Science, LIDAR and Radar Technology during 2002 – 2007.

Prof. Narayana Rao joined as Director of Research at SRM University in 2008, focusing on sensitizing and motivating the young students in developing an aptitude for research. Here, he worked closely in designing, developing and fabricating a Nano Satellite, SRMSAT launched by ISRO in October 2011. He has put in significant efforts in enhancing the research contributions and made SRM University as research intensive. Also, SRM Research Institute was established at SRM University in the year 2012.

Prof. Narayana Rao has published more than 150 research papers in highly reputed international journals and 34 students were awarded their Ph.D degrees under his research supervision. He has been highly recognized for his scientific contribution and has received the most coveted awards including Sir. C.V. Raman award for outstanding contribution to Physical Sciences by UGC, K.R. Ramanathan award for outstanding contributions to Atmospheric Sciences, He has been twice awarded by the Hon’ble Prime Minister of India: First in 1996, he was awarded for excellence in the field of Space Science and Applications, and then in 2011, he was given the S.S. Bhatnagar Memorial Award (ISCA).

He is a Fellow of National Academy of Sciences, India and a Fellow and Vice President of the Institution of Electronic and Telecommunication Engineers (IETE) and member of several Scientific and Technical Committees. He was the President of Andhra Pradesh Akademi of Sciences during 2007-2010. He has directed a couple of courses at the UN Center, The International Centre for Theoretical Physics (ICTP) in Trieste, Italy. In addition, he directed the programme and formulated the chain of radars that went on to become INTAR, International Network of Tropical and Atmospheric Radars, to study the atmosphere in the tropics.

Dr. Narayana Rao is widely respected globally for academic and scientific assignments and for international scientific collaboration and has partnered with peers in US, Canada, Peru, UK, Australia, Hong Kong, SriLanka, Japan, Italy, France, Singapore, Taiwan etc. He has made significant contributions through international collaborations in the field of Atmospheric Sciences to monitor regional and global Climate Variability.