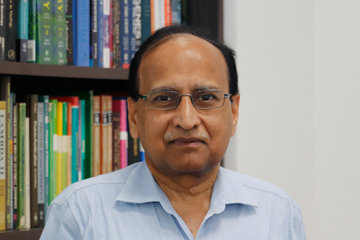 Prof C Durga Rao is one of the leading scientists in the field of Virology in India. He was an alumnus of Aligarh Muslim University, where he pursued his bachelor and master's degrees. After receiving his doctorate from the prestigious Indian Institute of Science (IISc)-Bengaluru, Prof C Durga Rao had extensive post-doctoral experience spanning seven years at the University of Alabama, Birmingham, and National Cancer Institute, National Institutes of Health, Bethesda, USA. He started his independent career as an assistant professor in 1988 at IISc. In 2005, he was made the Chairman of the Department of Microbiology & Cell Biology at IISc. He later worked as an Indian National Science Academy (INSA) Senior Scientist at IISc from 2016 to 2019. He also served as the Vice President of the Society of Biological Chemists, India, from 2006 to 2008 and is a member of the Executive Committee of Biological Chemists, India and Society of Biological Chemists, India.

During the three decades of his academic career, Prof C Durga Rao has published numerous research papers in many esteemed national and international journals. He was also the recipient of many prestigious awards and fellowships. His celebrated research in the field of Rotavirus won him the Indo-US Vaccine Action Programme Grants for Rotavirus research and vaccine development during the year 1990-99 and the Bill and Melinda Gates Foundation Grant for Rotavirus Vaccine Development during the year 1999-2004. He played a crucial role in the development of Indian Rotavirus Vaccine development and was the recipient of the prestigious National Biotechnology Award for Process and Product Development for his contribution to Rotavirus vaccine development, awarded by the Department of Biotechnology, Govt. of India in the year 2003.

Prof Rao served as a Visiting Scientist at Stanford University, USA, from 1990 to 1993 and a Visiting Professor at Mount Sinai Medical School, New York, USA, during the years 1997-2001 and 2008-09. He was granted the Fellowship from the National Academy of Sciences (NASI), Indian National Science Academy (INSA) and Andhra Pradesh Academy of Sciences (APAS). He was also a member of committees of funding agencies, reputed institutes and organisations, including the Indian Society of Cell Biology and the Indian Association for Cancer Research, RNA Society and American Society for Microbiology.